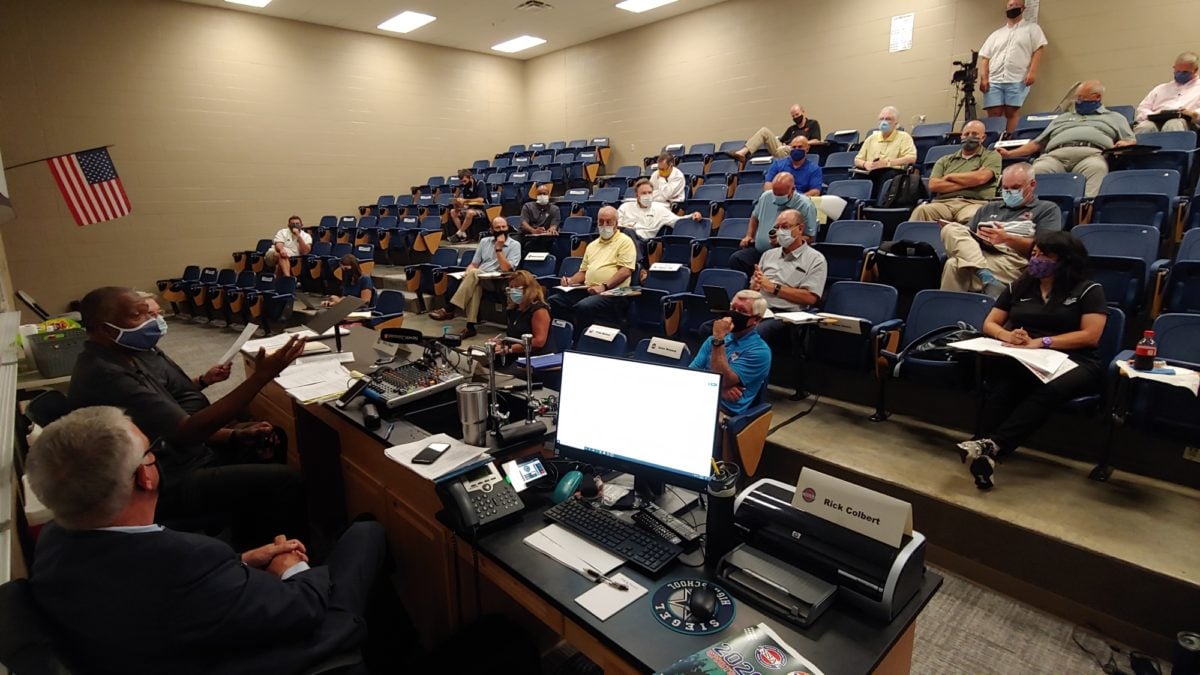 Tennessee now has a roadmap for both high school football and girls’ soccer in the fall.

Convening its Board of Control Wednesday in Murfreesboro, the Tennessee Secondary School Athletic Association (TSSAA) approved measures to outline the potential for a nearly complete football and girls’ soccer season.

The league also adopted unanimously its COVID-19 guidelines and procedures required of all member institutions who wish to compete in all athletics in the 2020-21 calendar school year.

A full copy of the regulations and fall sports rules modifications can be found on the TSSAA website.

“The regulations and guidelines the Board passed today go into effect immediately for all sports,” said Bernard Childress, Executive Director of the TSSAA. “We’re hopeful that the prohibition on contact sports will be lifted before August 29, but if it’s not, the Board of Control has put some policies in place to help keep our kids and communities safe and lay out a roadmap to the start of our football and girls’ soccer seasons.”

What the association does not yet have is an exact start date for competitions. The reasoning there is fairly straightforward: Tennessee high schools and their athletics programs, as well as myriad other entities, cannot begin practices and/or games in contact sports under Gov. Bill Lee’s current State of Emergency Order. Executive Order No. 50 promotes “social distancing and avoidance of large gatherings” and limits activities in contact sports.

“The governor’s (executive order) is still in place. We cannot do anything right now other than weightlifting, conditioning, heat acclimation periods with no contact. This is not TSSAA vs. the Governor’s Office. Everything has been a joint effort and we are not in conflict. Our goal is to have an ordinary season as much as possible.”

For football’s “Option 2 Hybrid” plan, the state preserves the potential for an 10-game regular season and full playoff format, but also lays the groundwork for what could become an eight-game season with a reduced playoff field for Division I.

The plan perhaps is most succinctly summarized as thus: Once the state of Tennessee reaches the date of August 4 and the governor’s executive order declaring a State of Emergency still stands, region games originally scheduled for Week 1 of the prep football season will be moved to later, common dates that TSSAA already has modeled. As each week passes where no contact is allowed, the next week’s region games are rescheduled.

For Greg McCullough, Memphis Central principal and TSSAA Board of Control vice president, keeping schools’ schedules nearly intact was a strong positive. The original Plan 2, as conceived, would have gutted all schedules statewide and left coaches scrambling to fill multiple open dates.

“Just my personal opinion, but having lived that scheduling nightmare already, this makes sense to me, but it needs to be explained well to coaches. This allows a better option for all schools and gives a chance for schools to play as many games as they can possibly get.”

Now, with a vote on the Option 2 Hybrid, there is a potential start date in place and a plan for the season to begin as early as Aug. 21 or as late as Sept. 18.

The TSSAA already had modeled how it would handle the potentially affected region games slated for the original opening week of the season with the following example:

William Blount and Maryville High School are scheduled to play each other at the onset of the season; both teams have non-region games in Week 7. The Govs are set to play Elizabethton while Maryville is scheduled to face Knoxville powerhouse Fulton. Maryville and William Blount, under the Option 2 Hybrid, would then face each other Week 7. Elizabethton and Fulton could work to play each other, find another game or have an open date. Only region games are mandatory.

"As of this past Monday, football teams were permitted to begin their heat acclimatization, which can be done without contact," said Richard McWhirter, TSSAA Assistant Executive Director. "Understanding though, that heat acclimatization is 'per athlete,' I recommend that schools get students' acclimatization done as soon as possible. Athletes that have completed acclimatized by the time the contact order is lifted are then ready to begin full contact practice."

The board also tackled how to handle a COVID-19 breakout as it pertains to competition in both the regular and postseason. A regular-season game becomes a win for seeding purposes if the opposing team can’t play due to COVID-19, but the team struck with illness would receive neither a win nor a loss. If both teams confront outbreaks of the virus, it is considered a “no-contest.”

Additionally, for all sports and not merely the upcoming fall divisions of cross country, golf, volleyball, football and girls’ soccer, the TSSAA and its board voted unanimously to allow students whose school systems are beginning with remote instruction to still be allowed as full participants in all sports.

On the girls’ soccer front, in an effort to maximize the number of games and opportunities for competition, the TSSAA adopted a measure to begin the season September 7 --- if Gov. Lee’s order is lifted after its current August 29 expiration date --- with a regular season spanning eight weeks from beginning to end and championships set for Nov. 11-14. If the order is lifted prior to Aug. 10, the season and championships will proceed as usual with no changes.

Additionally, the organization voted to allow girls’ soccer teams that either do not qualify for postseason or which are eliminated prior to the championships to schedule additional games, up to the maximum number, in order to achieve a full season of competition. This builds in some flexibility in the event multiple matches are cancelled or postponed in the season due to the virus.

“This gives schools the chance for the maximum number of playing regular-season contests,” said TSSAA Assistant Director Mark Reeves. “We will continue allowing schools to play regular-season games even after eliminated or failing to qualify for the postseason. They are not to exceed that number (10) but at least they have the opportunity to get to it.”

See the complete sports regulations, rules modifications and contingency plans on the Tennessee Returns To Play page at TSSAA.org.