Wright recognized for distinguished service as an administrator and coach

Long-time Fulton coach active at school and in the community 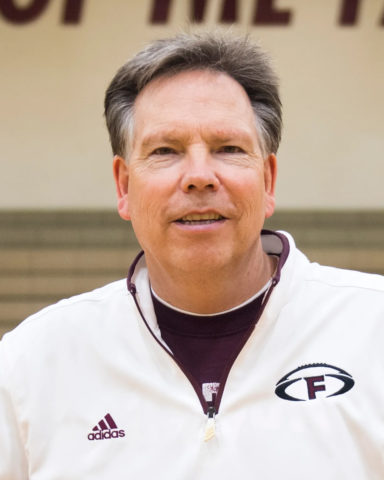 The job wasn’t even one for which he had applied, and after three years and 13 wins, it hardly seemed destined to result in one of the most remarkable coaching journeys in the history of Tennessee high school athletics – or anywhere, for that matter.

Now, nearly four decades and more than 800 wins later, Jody Wright remains an institutional icon at Knoxville’s Fulton High School, where he has guided the Falcons to a trio of state basketball championships, five runner-up finishes and more than 10 additional trips.

“I have really felt like in the midst of a lot of other things that have changed, I am right where God has put me,” said Wright, a 12-year member of the TSSAA Board of Control who over the years added assistant principal and athletics director duties to his Fulton responsibilities. “And I wasn’t smart enough, you know, when I got here to see His handiwork in me coming here. It was a job I didn’t even apply for.

“But I was able to come here as a young coach, be around guys that were stalwarts like Bob Black and Steve Brewer and to watch those guys and have those guys mentor me and really show me what high school coaching is all about.”

Even with 813 victories and counting, Wright more easily reflects on his longstanding service both to the Fulton school and that tight-knit segment of the Knoxville community as well as his decision to stick with his Falcon roots despite innumerable offers to coach elsewhere for a larger paycheck.

“In the midst of a lot of opportunities to go elsewhere and make more money, I’m right where I’m supposed to be,” Wright said. “I don’t know what the future holds, but I know who holds my future and I’ve let Him direct my path.

“I do think He puts people in places where He can use them and I think He rewards us when we’re faithful to His call. I’ve been rewarded far more than I could have ever imagined or deserved. I’m called to be here, and I’m supposed to be here.”

After closing his own playing career at Lincoln Memorial University, not then the NCAA Division II power for which it has emerged in recent seasons, Wright nonetheless learned under one of college basketball’s all-time great ambassadors: Rick Byrd, the retired Belmont coach who turned the Bruins into a nationally acclaimed basketball program.

After a year as a graduate assistant under Byrd, followed by a year as the head coach at Horace Maynard High School, Wright was then invited to begin his record-obliterating tour de force at Fulton.

Well-versed off the court, Wright continues to pour into a number of philanthropic endeavors in addition to molding youth at Fulton High School; he’s intrinsically involved with the Emerald Youth Foundation, Second Baptist Church of Clinton and Knoxville-area Boys and Girls Clubs.

Sure, it makes a busy schedule for the 61-year-old Wright, but he can’t imagine another path.

“I think that’s part of what your job as a basketball coach is, especially these days,” Wright said of being a multifaceted influence for his charges. “If you only wear one hat, and that is of coach, you miss a great opportunity. I think the truly good ones in this profession, they embrace the fact that they’re a coach, a father, mentor, role model, all those things right there.

“What I have watched from really good coaches, I have watched them do all of those things. You have to wear those other hats here at Fulton and wear them well because we have such an opportunity and platform. If all we’re doing is teaching guys how to play man to man defense or motion offense, I’m missing a great opportunity that we have here to teach these kids about handling adversity, success, how to have character, how to grow from a boy to a man. How to handle all the challenges that they’ll face in life.”

As for his own challenges, Wright continues to attack each day as though he’s missing those 800-plus wins and still building off that modest initial foundation.

“My fire is still burning hot,” Wright said. “I get asked that a lot. I’m 61, and have been doing this a long time but I don’t feel 61. I think people who coach and work with me would tell you, I go … my intensity burns as strong now as it did 20 years ago.

“I hope I know when it’s time to go. That’s been my prayer, Lord let me know. I still love it, still enjoy it and still look forward to every day and every practice.”

TSSAA proudly salutes Jody Wright for his contributions as an administrator and coach to student athletes in Tennessee.