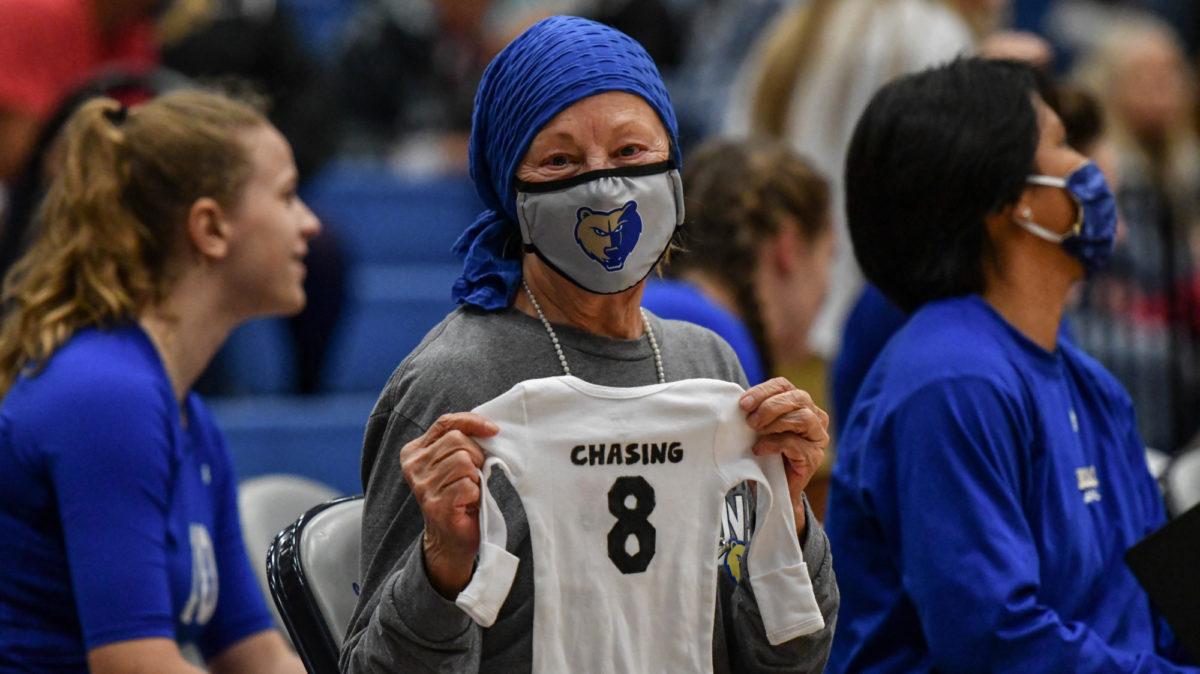 Barbara Campbell chalked it up to sinus congestion.

Certainly, she believed, it was not a serious medical issue.

And Campbell had watched her players' selfless actions, their willingness for hard work and to be anything but, well, a “normal teenager” as an unprecedented pandemic roared around the globe. COVID-19 has threatened the very fabric of in-person education and extracurricular activities, such as participation in a volleyball program with national renown as testament to dedication for a singular cause; a team unit with a central heartbeat.

Campbell would battle through the headaches, she reasoned, because everyone already had sacrificed just to present a season with any semblance of normalcy.

“I was really having bad headaches and tooth pain,” Campbell said, recalling the course of events in late September. “I did go to the clinic thinking it was a sinus issue and was treated for sinus problems. It wasn't sinus. The very next evening, I passed out.

“Luckily my husband (Mike) was here and acted quickly. I did suffer a stroke, and I went to the ER. They flew me to Vanderbilt, and I was in the hospital for two weeks.”

Sixteen state volleyball championships for Brentwood, the last eight in a row, reveal the story of a program with a granite foundation, a legendary leader, committed, talented players and assistant coaches as well as an ability to adapt. 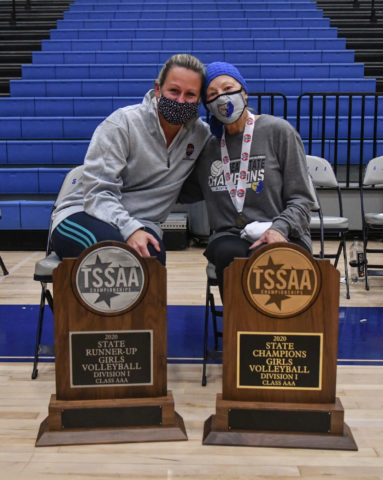 No tale, however, quite comes close to the story of the 2020 Brentwood Lady Bruins' volleyball dynasty and their iconic coach, Barbara Campbell, whose potentially dire health situation transformed into a rallying point for the powerhouse program.

In winning an unprecedented eighth-straight TSSAA Class AAA State Volleyball Championship this fall, the Lady Bruins wove together a story of perseverance and toughness as iron-willed as their head coach.

“Well, it's been a stressful season,” Campbell said matter-of-factly after first making sure to note she'd prefer any interview be with her Brentwood players or assistant coaches, Angie Noble or Cathy Cram. “In the beginning, we were just praying that we would have a season. Early on, we were told that we were not able to do our preseason events that we scheduled and then the schedules we had worked hard to prepare, we were told that we couldn't do the overnight travel.

“So those out-of-town, out-of-state tournaments that we really depend on for not only the competition but for team bonding and the playing experience, we weren't able to do those. It was basically a week-to-week thing.”

No entity in athletics has been spared this year from COVID-19's invisible tentacles. Major League Baseball, the NBA and NHL, and professional golf, all played truncated seasons. In Tennessee, as in almost every state around the country, spring sports were wiped off the calendars almost simultaneously to their scheduled starts.

This fall, COVID-19 has cost prep football teams games and playoff opportunities; it has forced the cancellation or postponement of countless college football and NFL contests.

Naturally, no matter how tightly the Lady Bruins worked to remain ensconced in their community and team cocoon, the coronavirus hammered their program as well.

“It's crazy because I had a very competitive play-day at Brentwood instead of an out-of-state tournament,” Campbell said. “The day before, I started getting the phone calls, 'Coach, I'm quarantined because of COVID exposure.' I had five kids out.

“I went ahead with it and at one time there were four freshmen on the court. With adversity, in the long run, I think that helped strengthen my team in areas. Players had to step up who normally weren't called upon. And then players we still had on the court had to assume more responsibility. I really do believe that did make my team stronger. It was a very stressful time.”

A period that laid bare the great leadership with which Campbell, Noble and Cram had infused the program.

“My seniors with gifts of leadership really took charge of their attitudes with a strong focus on team,” Campbell said. “And just once again, they would not be denied.

“They overcame enormous adversity with COVID and then my absence due to health issues with the power of their determined attitudes and intense desire.”

A six-year assistant in the program, Cram saw the team's indefatigable approach redoubled in the absence of Campbell.

“I feel very proud of it, because going through all those adversities and we were still able to make it,” said Cram, whose daughter, Andrea Aceveda, turned four-straight Brentwood volleyball championships into a full scholarship from prestigious Furman University. “A lot of people were hoping for us to lose, but we were able to still pull it through. Everybody, every year just wants to beat Brentwood, and I enjoy having all those rings. 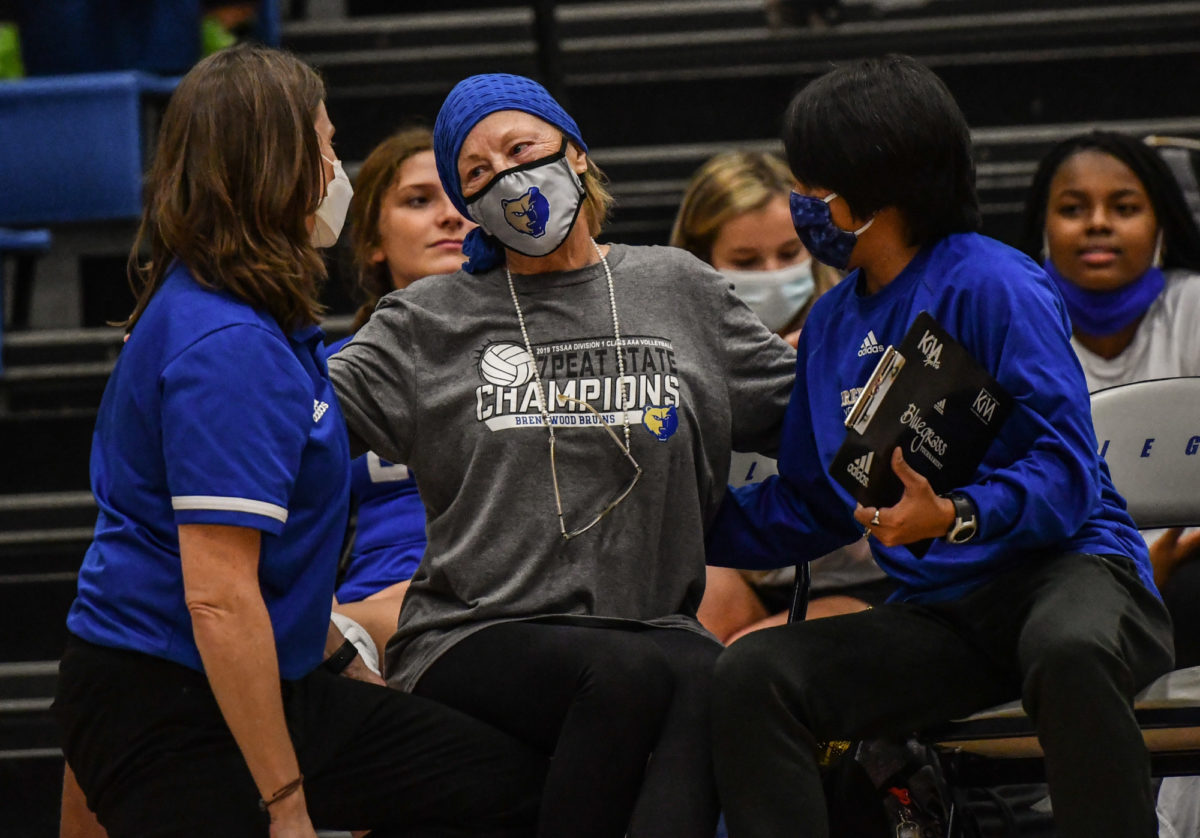 “It's a privilege and honor to coach at Brentwood with Coach Campbell. I've been in three different high schools and Brentwood is a special place. Coach Campbell does everything she can to help the kids get better.”

The players and coaches likewise kept alive Campbell's spot on the bench during her absence for medical reasons as the season stretched into the postseason.

Everyone associated with Brentwood volleyball, and Tennessee volleyball, for that matter, knows that Campbell has always preferred to perch at the end of the bench, where she finds a better feel and view of the game. With their coach absent, Brentwood left a golden crown in Campbell's traditional space.

Still, as the Lady Bruins battled to the crescendo of their season – a championship bout against rival Siegel High School – Campbell had resolved to stay away from the program that she'd worked to define as among the best nationally in any prep sports program.

“Just like an hour before the team was to play, Coach Noble called me,” said Campbell, whose daughters, Kendra, Keri and Courtney all won championships with the program. “And she said, 'Barbara, are you going to be able to come?' And I said, 'I've thought about it. I'm gonna stay home. Y'all are on a roll. You've got this. I don't want to be a distraction. Then I said, 'What do you think?'

“I told the family, got ready in 10 minutes and my husband, who's a big Brentwood volleyball fan, drove me to the match. Luckily, we got there just right before the state final match started, right before the first serve, and I was able to walk in and join the team.”

That Brentwood had found itself in position to extend its dynastic run, Campbell explained, was due to the players' dedication and the assistant coaches' devotion to the cause.

“Although they came to me with experience and expertise, these ladies have been trained together for six and eight years,” she said of Noble and Cram, respectively. “So they were able to step in, step over, take the reins and help the girls through and direct the girls through that really important time in the season, the postseason. For two weeks of it, through districts and regions, I was in the hospital and wasn't even streaming games at that time. I just wasn't able to focus and concentrate on what we were doing, exactly the game plan. My assistant coaches just took charge.

“Luckily, I've always referred to tournament time as party time for the Lady Bruins. It's just a fun time, and we've usually paid the price in preparation.”

Cram notes that Campbell already is working to plan some kind of banquet for the Lady Bruins, with an eye toward the COVID-19 protocols, and working on Brentwood's 2021 schedule.

“Even when she is home resting, she is still 100% involved with the team,” Cram said.

The fun is now returning in more areas of everyday life for Campbell, who's recovering on schedule from the harrowing hemorrhagic stroke.

“I went for my last CT Scan and was given great news,” Campbell said. “Everything looks great, I'm healing, and it's going to take a little bit more time to get that strength and stamina back, and although I'm beginning to feel pretty good, I have to pace myself. I'm also very, very blessed.

“I have three daughters, all of them played for me, and they were with me every minute of what we went through. Someone has been with me every minute all along. I'm very thankful. I'm also very, very fortunate and blessed to be in a community where the parent support is just unbelievable. These parents will do anything to support their kids and help them be successful. And the administration at Brentwood, our athletics director, Joe Blair, and principal, Kevin Keidel, I can't even begin to think there could be a better situation as far as allowing the confidence of working in an environment like that, what it does for a coach. It's just very motivating and encouraging and I'm grateful and I'm blessed. Terribly blessed. Wow. And I'm getting better.”