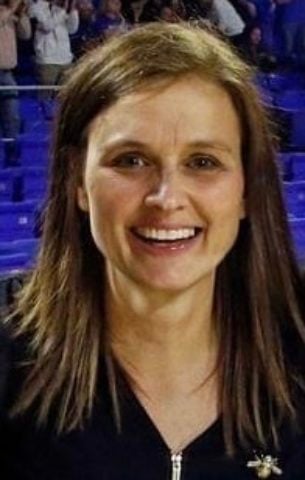 Initially, it was just going to be a first stop on the path towards a collegiate coaching career.

After all, Dana McWilliams was just 23 years old and mere months removed from her own decorated playing career, finishing up at Tennessee Tech.

So her return home to the close-knit Baxter community, and a position leading the Upperman girls’ basketball program, wasn’t expected to turn into what assuredly will be a distinguished coaching career when it is done.

Moreover, she remains a fixture in the community with an ever-growing coaching tree – both within her family and courtesy her family of former players. For these reasons and more, McWilliams is a TSSAA Distinguished Service Award winner for the 2021-22 academic year.

“Honestly, when I was playing at Tennessee Tech, I really envisioned probably trying to go the collegiate route as far as coaching,” McWilliams said. “I met my husband, Bobby, at Tech. We wanted to coach and wanted a big family. I just wasn’t sure the college route was the right thing. When the opportunity opened up, I thought it would be a good decision for Bobby and myself and our family. I didn’t envision 28 years, but life happens.”

While Dana coaches the Upperman girls’ team, Bobby heads up the school’s boys’ program. It’s long been and continues to be a family affair, with their sons playing and also returning to the community.

“I’ve always said that our purpose can’t be about winning basketball games; it has to be much bigger than that. You can’t coach for wins and losses,” she said. “You coach for the relationships you build with players and people around you.

“I’ve felt very blessed to coach a lot of great kids. Hopefully, I’ve been a positive influence for them and helped them grow. For me, it really is all about relationships. Two of my current assistants played for me in my younger days.”

Relationships now in the McWilliams family include those among multiple coaches, not just Mom and Dad. Three of their four sons are coaching basketball and another one is teaching in the school system.

“Our oldest son, Tyler, is now my assistant coach and was head coach at Cumberland County last year,” McWilliams said. “It was a great experience for him, but he had an opportunity for a job here and he came back to help me again. Austin is an assistant coach at Lebanon High School with Jim McDowell, and our youngest son, Jace, graduated last year and is helping Bobby. Koby just took a teaching job at our middle school.”

The shared sidelines now are just more memories, adding to those of the family traveling together through hundreds of games and too many meandering bus rides to count.

“Well, it can get hectic sometimes during the season, but the one thing that is really cool is that we would always go together as a family to our games,” McWilliams said. “It didn’t feel like we were missing out on family time or each other because we didn’t know any different than a hectic basketball season.

“But when my sons were playing, I was just ‘Mom’ and their biggest fan. I listened to them, just like any other parent would do and encouraged them and let them know I was proud of them. I feel like all my boys would tell you that there was no pressure to be great as a basketball player. I’d much rather you be a good person than a good player, and I’m always proud regardless of how the game goes.”

TSSAA proudly salutes Dana McWilliams for her years as a coach, educator, and mentor to student-athletes throughout her career at Upperman High School.