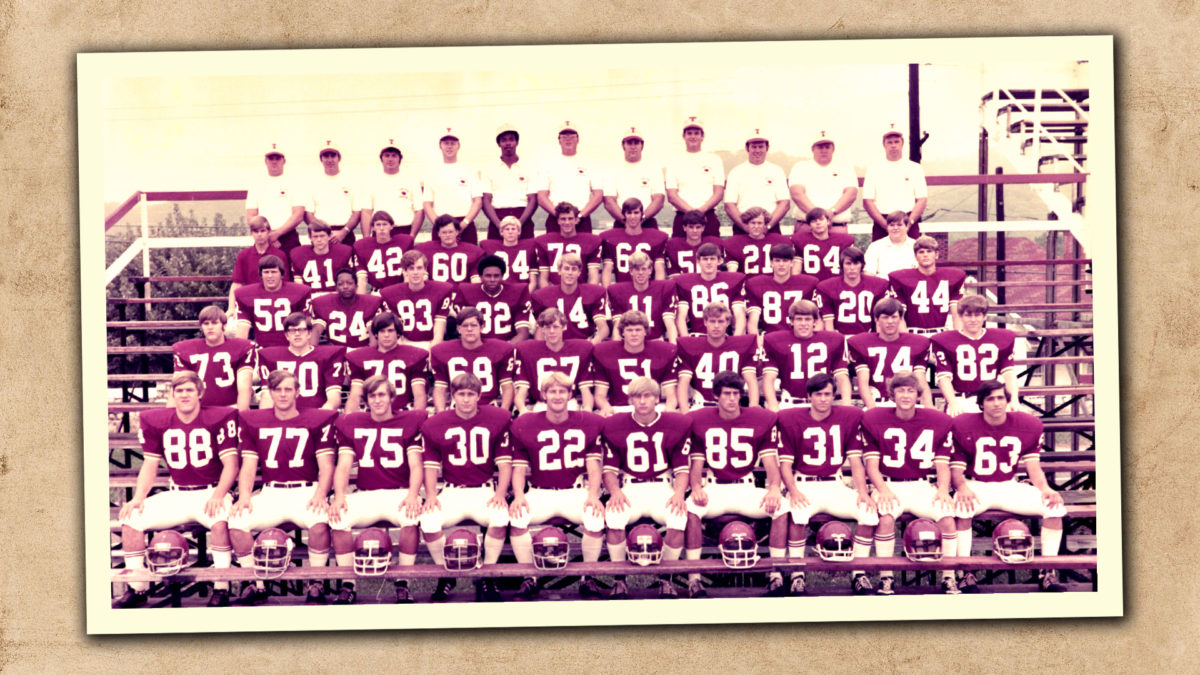 There had been a previous state championship, and some national acclaim.

Yet as Tennessee High School’s legendary squad entered the 1972 football season, the Vikings’ players approached their gauntlet with a twofold mindset: Play for the man on each side of you and “show them we can play a little football up here in Bristol.”

Mission accomplished, in a superlative standard that has stood the test of time five decades henceforth.

A year after storming to the 1971 Class AAA state crown, Tennessee High repeated in 1972 – with an unblemished record and such a dominant tour de force that the program was heralded as national champions.

“Basically, I just remember us trying to get better each week and not to let each other down,” said former Viking great Greg Jones, a hard-hitting linebacker who went on to play at the University of Tennessee as one of double-digit members of those Tennessee High squads to play college football. “Our practices were hard, and people thought that we weren’t that good.

“We just kind of had a chip on our shoulder, and had been playing together since middle school and against each other since elementary school. We just felt like when you come to play us, you’re going to play us.”

The Vikings never stopped sending that message – all the way through to the title bout against Chattanooga-area private school Baylor. Tennessee High romped Baylor, 39-6, in a game that capped its three-game steamrolling of all postseason foes. The Vikings won those three playoff tilts in the state’s largest division by a combined 105-18; all three wins came by at least 26 points.

Jim Stoots, who played on the Vikings’ 1971 title team and graduated in ’72 but has maintained decades of service to the TSSAA officiating multiple sports, recalled the program’s defense from those dominant years and also the same bond that Jones said had helped drive Tennessee’s success.

“We played each game just like we were 0-0 when we stepped on the field,” said Stoots, who noted the Vikings yielded less than 100 points during their initial title run and barely allowed 100 through 13 games in ’72. “As I think back about it, they started a youth league program in Bristol and we all played against and with each other since we were in elementary school.

“I think we had an advantage because we had some guys that taught us fundamentals at a young age. Which really helped us along the way. We didn’t have to learn those fundamentals at the middle school or JV level. So I think that was a big advantage for us.”

“We had an outstanding coaching staff,” Bibee said. “They were ahead of their time and they were all outstanding. … They were really special.

“It was amazing, the year before we were second (nationally) and our junior year we had won the semis 49-0 and then 54-0. We had momentum going in (to the 1972 season), and they knew about us and we didn’t let them down.”

With the full arsenal of players who earned college football scholarships virtually too numerous to count, Tennessee High sent players from those squads to the University of Tennessee, Vanderbilt, Virginia Tech and Tennessee Tech, among a bevy of additional programs.

Winning wasn’t quite enough; the Vikings were challenged week after week to find ways to improve upon their perfection.

“Our coaches had a lot to do with that. They wouldn’t let us get complacent at all,” Jones said. “If they thought we were starting to get the big-head, they would humble us pretty quick. It would get a little harder than normal. I never had a practice in college as hard as the practices I had in high school.

“It’s just something to be very proud of and we all know we couldn’t have done it without each other. That was our goal, to let people know we play football here in Bristol. They kind of found out pretty quick.”

And the Vikings’ home, the fabled ‘Stone Castle,’ added its own aura of intimidation for opponents that traveled all the way to the edge of Tennessee-Virginia state line for a shot at powerhouse Tennessee High.

All those elements added up to cap the bookend championships. And that ’72 campaign embodied wire-to-wire dominance; the Vikings won 12 of their 13 games by 20 or more points and had only rival Elizabethton play them to within a touchdown as they outscored all foes 472-107.

“I didn’t expect to lose,” Jones said. “Practice wasn’t my favorite thing but that’s where you learned your basics and how to get better. We learned that in high school.

“We weren’t going to let each other down. We knew there were going to be mistakes made, that we all would make mistakes, but we would not make those mistakes twice. You just didn’t let your fellow player down. These are my brothers. We sweated together, had our disagreements, but when they blew the whistle, we were all one.”