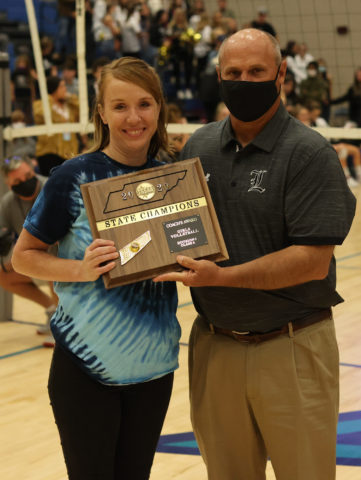 Andrea Kelly had been a part of history at Summertown High School, but it was her thoughts on the future that Kelly kept returning to as she examined her life path two decades ago.

And Kelly kept coming back to one overarching element: She wanted her family, whatever it was going to be, to grow up in what Kelly at a young age already knew was a special place.

“I knew that I wanted my kids to grow up in Summertown, just a small-town atmosphere and a special place,” Kelly said. “I knew that’s where I wanted to be, and the timing didn’t work when I first got out of college but I think those seven years I spent in other places taught me a lot of things, but also that there’s no place like Summertown.

“The teachers and coaches care so much, and it’s just different than anywhere else I’ve been and I think that helped me know how special it is.”

After setting records as a student-athlete at Summertown – including helping the school to its first-ever girls’ state tennis doubles title, Kelly now has turned her alma mater’s tennis and volleyball teams into state powerhouses as their coach. For her impact in the classroom, the playing surfaces and in the community, Kelly has been named the Tennessee Secondary School Athletic Association Distinguished Service Award winner for the month of September.

Kelly and her husband of 20 years, Shaun, do all this while raising their four children: Gracie, a senior on both the volleyball and tennis teams; Annalee, a freshman on both squads; Caroline, in third grade; and Jace, in second grade.

“There’s not a lot of spare time,” Kelly, a University of North Alabama graduate, said. “My offseason is November and December and then tennis kicks off in January.

“It’s a pretty short offseason, but I’m really passionate about tennis and volleyball because they’re considered smaller sports, and I feel like kids that play those sports don’t get the same recognition as some other sports, but I’m super-passionate about those kids and their accomplishments. I think it’s super-important as well to make sure they get that recognition.”

It’s been impossible to ignore the accomplishments of Kelly’s Summertown squads in recent years. Summertown has seen Kelly’s volleyball program win back-to-back TSSAA State Championships in 2019 and 2020 and add a runner-up finish a year ago; on the tennis courts, the girls’ team won the state crown in both 2019 and 2022 while it posted a runner-up finish in 2021. Kelly’s oldest daughter was part of the 2022 doubles’ state championship-winning duo.

There were no spring sports championships in 2020 due to the COVID-19 pandemic.

Navigating her 21st year in teaching and 18th coaching at either the middle or high school levels, Kelly has watched her family grow up around her sports and become part of the very special fabric that is Summertown athletics.

“My kids have spent a lot of time in the gym with me through the years,” she said. “When we didn’t have a babysitter, they were at practice with me. I think that speaks to their love of those sports, because they’ve been around it so long and they don’t really know any different than to be around them. I get to be right there with them and see those huge accomplishments, to be there and experience that with them, especially Gracie with her state championships is just super-cool and super-rewarding.”

Now Jace, the youngest, has found himself equally intertwined in Mom’s teams.

“They’re right there in the middle of it, and I’ve been lucky with coaching boys’ tennis and girls, then volleyball, and my players have just really taken care of helping my little ones,” Kelly said. “It almost brings me to tears how my little ones look up to those kids.

“My son, he would tell those boys I love you before he left practices with them because he’s right there in the middle of them soaking up all of that. I think that just makes it a situation of there’s no better way to grow up as to see those good examples that they are.”