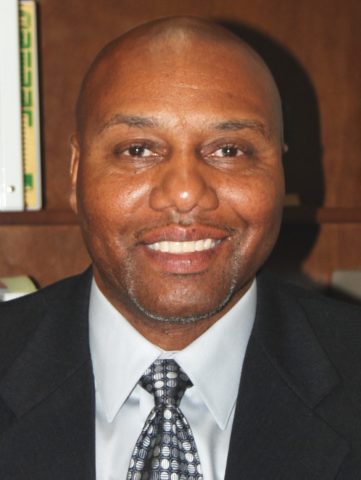 For much of his youth, Roosevelt Sanders never gave much thought to attending college.

It was the late-1970s in Nashville, and Sanders knew his parents were sacrificing to all lengths simply to provide for their family.

Then, Sanders started playing basketball. He got good. He stayed on task in the classroom, so much so that one of his teachers encouraged him to keep up his academics and pursue athletics as a means to continuing his education.

Sanders took the words to heart, and he took advantage, plus made his own breaks, along the way.

The result? He’s closing in on four decades of service to Metro Nashville Public Schools. And the former TSSAA High School Athletic Director of the Year is once again being honored for his selfless service, this time as a 2022-23 Distinguished Service Award winner.

“To be honest, when I was in high school and in thinking back, I wanted to graduate and didn’t have a lot of aspirations of going to college because I knew my parents couldn’t afford it,” said Sanders, now Metro Nashville’s Athletics Director for all elementary and middle schools in the system. “My skill level in playing basketball didn’t really start till 10th grade, and when I was a senior, my skill level was still developing. But a few people took interest in me, my English teacher back then, asked me what I would do after high school. She took a vast interest in trying to guide and direct me. And she said my education could be paid for with a scholarship if I inquired and worked hard enough.

“Nothing happens by chance, the Lord has me here for a reason. What I have, He gave me. Where I am, He brought me, and what I know, He taught me.”

Sanders has taken his life lessons – honed from graduation at Nashville’s Glencliff High School, then junior college for hoops at John C. Calhoun in Alabama, which paved the way to finish his career at Austin Peay State University – and poured them back into the only home he’s ever known.

Sanders capped his education at Austin Peay in 1982, accepted a teaching position at his high school alma mater in 1984 and hasn’t looked back.

“I didn’t sub or teach at any other school,” Sanders said. “I knew I wanted to go back into education and coach. I just felt that desire to want to coach and help young people. I got the only position available at Glencliff, and I felt like this is where I’m supposed to be, what I’m supposed to be doing.”

Sanders had an extended run at Glencliff that included his work as a teacher as well as a coach in basketball, track and cross country before he transitioned into an administrative role as an assistant principal and athletics director at the school.

His exemplary work there saw Sanders afforded the opportunity in 2010 to take over the athletics director’s role for all of the system’s high schools. Among the changes Sanders helped usher in for the system were the ability for sixth-graders to join their respective middle school’s athletics teams and to revamp the pay structure for coaches in postseason settings at the high school level with tier pay and incentives for advancement beyond the regular season in their respective sports.

Since taking over the elementary and middle school position, Sanders has continued to help grow athletics among Music City’s youth.

“Now is an exciting time because we are putting sports programs and activities into our elementary schools,” said Sanders. “We just had our inaugural season with boys’ and girls’ cross country and more than 35 schools participated.

“In the spring, we’re hoping for boys’ and girls’ co-ed soccer and then looking at expanding next year.”

It all has Sanders energized, even as he forges into his sixth decade in Nashville schools since his time as a student, teacher and now long-running administrator. He just told his wife, Sherleta, as much in recent days.

“My wife and I talked about it this weekend,” said Sanders, whose children – sons, Andre and Aaron; daughter, Alexandria – all graduated from Nashville schools. “I wouldn’t continue if I didn’t love what I was doing and didn’t think we were making a difference. The change to elementary and middle schools has given me a new energy, kind of been a booster. You have to love what you do, have to have passion in whatever area, teachers, administrators, coaches all.

“My wife and I walk around different parts of the city, and no matter where we go, 38 years in the system, some person comes up from the past and says, ‘Hey, you were my principal, teacher, coach.’ They’re always wanting to let you know how they’re doing now. Because some of them starting out didn’t seem to have a bright future, but now they want to let you know they’re doing good.”

TSSAA proudly salutes Roosevelt Sanders for his contributions to education-based athletics and student athletes in Tennessee.