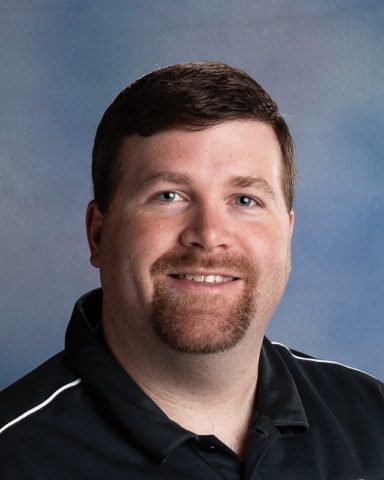 Oak Ridge runs as deep in the veins of Scott Hinton as does the 'Secret City's' mythical reputation for its help in the Manhattan Project to assist the United States' triumph in World War II.

Hinton's grandparents stretch their roots back to Oak Ridge around World War II, and his family has made generational treks through the city's school system in the ensuing decades.

Now athletics director at Robertsville Middle School in Oak Ridge, Hinton is being honored by the TSSAA as one of the ten 2020-21 recipients of the organization's prestigious Distinguished Service Award for his selfless work in giving back to the youth of his hometown.

“I knew when I was in high school that I wanted to teach and wanted to coach basketball,” said Hinton, an eighth-grade American History teacher who began student-coaching as a freshman at Oak Ridge in the mid-1990s. “Even though I wasn't good enough to play, I was really good friends with Matt McMahon, now the Murray State head coach, and Tim Kaine, we're friends from Oak Ridge.

“I knew just having that passion and being around those guys that I wanted to teach and give back to others.”

Hinton's seen his roles intertwined with youth athletics in his community since the early 2000s, when at the behest of another mentor, current Coalfield basketball coach David Scott, Hinton helped resurrect the Robertsville Middle School girls' basketball program. Hinton served as head coach of the Lady Rams through the 2012-13 year, when he added the dual role of school athletics director.

He's not looked back since that time. In fact, Hinton and wife, Tonya, are enjoying seeing their oldest son, Hunter, in school at Robertsville; 7-year-old Hayden is a few years from what could be a similar path.

“One of the cool things was winning the area tournament title in 2009,” said Hinton, who also counts former Oak Ridge coach and principal Chuck Carringer, as well as the late Stan Ballard, among his key basketball mentors. “We beat Norris, and we had some battles with them and lost a couple times in the regular season and then beat them in the area tournament in 2009. It was the first time since becoming a middle school in 1995 that we ever won the area title.

As athletics director, aside from working to enrich his students' lives in the classroom, Hinton focuses on alleviating stress for all the coaches at Robertsville. It's been a particularly challenging, and rewarding, year in that regard for Hinton as everyone navigates the COVID-19 pandemic.

“I've kind of grown into the role of athletic director, coming into it as a coach, my biggest thing is I want to take as many administrative things off my coaches' plates as I can,” Hinton said. “What can I do to make their jobs easier? So if that's handling officials, helping with scheduling, whatever it is, I want to do that. At the middle school level, it takes all of us. I want to try to eliminate as many things on their plate and allow them to coach their teams. Because that's what they're hired for.”

Oak Ridge Schools just reintegrated into classrooms at the start of November, and students, teachers and staff alike all are adjusting to the new reality of full hallways in a pandemic year. The fall sports, however, set forth a good model that Hinton hopes can be carried through the remainder of the academic and athletic calendar.

“The biggest thing, I think, that I take a lot of pride in is that we didn't have to shut down any programs,” Hinton said. “We made it through fall football, volleyball, cross country and cheerleading, and we didn't have to shut down for any cases, and I hope we can continue to do that in basketball. We all are seeing the case numbers going up, living kind of one day at a time right now.

“We didn't have to cancel a single event because of another team or anything. The kids got to play and that's the biggest thing. It was not normal, but nothing is normal right now.”

TSSAA proudly salutes Scott Hinton for his service as a middle school coach and administrator.