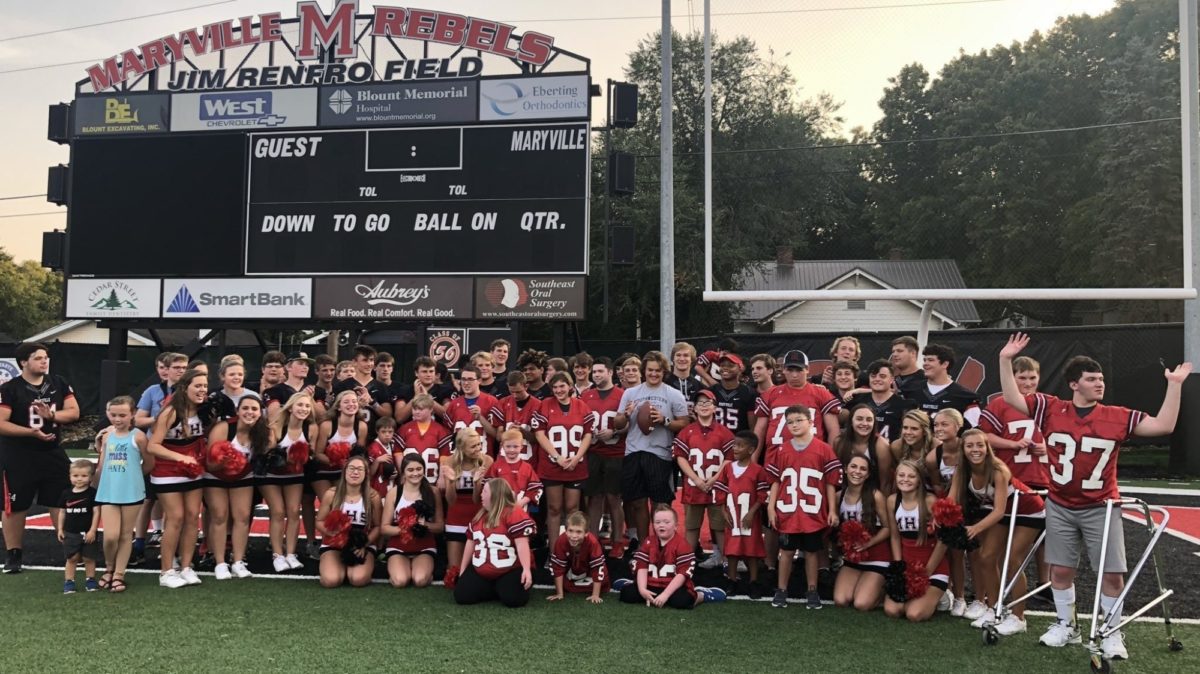 More than a football experience at Maryville

The name didn’t matter. Nor did any label.

It was, ultimately, billed the ‘Maryville Football Experience.’

Turns out, it was the experience of a lifetime for most everyone in attendance at Maryville High School last month, where storied Shields Stadium was the venue for perhaps its most unique football event.

“The idea wasn’t ours originally. I think it or something like it has been done at other schools, whether it be like a Special Olympics thing or special needs football night,” said Rebels head coach Derek Hunt, diffusing any credit for an evening he steered into existence with the help of Maryville staff and students. “To be honest, it grew legs when we were down in Costa Rica with a bunch of our football guys.

“When we asked ourselves as a football team, ‘What more do we have to give? What can we give to our community as a football team?’ Well, the football experience is something we certainly have to offer. So we kind of came up with it then, inviting every CDC (Comprehensive Development Classroom) class in our school district, and it grew from there.”

Hunt’s streamlined version of how the ‘Maryville Football Experience’ came online doesn’t wholly illuminate the efforts of so many in the high school and the system who fervently chipped in for the first-time event. Hunt’s idea needed district approval, layers of logistics to be engineered and a selfless approach to giving back from all sides. What mushroomed was an event with nearly 30 special needs students from the district, another 30 players, cheerleaders, staff members, parents and more.

Davidson, Maryville City Schools’ Federal Programs Director, shed insight onto the district’s approach to making the ‘Maryville Football Experience’ not just a reality but a dream come true for participants.

"I stood there and could hardly operate for the inspiration I was getting and the mist in my eyes."

“Coach Hunt came to me towards the end of our summer and said that the team and a lot of coaches wanted to do something special for kids unable to attend a regular football game and kind of target kids who really wouldn’t be able to attend at all without a lot of support,” Davidson said. “We picked kind of the target population, had three meetings and brainstormed how best to get the right audience there. It required asking all kinds of legal questions and problem-solving.”

Hunt and Chad Ramsey, an assistant football coach for the Rebels and a member of the district’s CDC staff, had presented the proposal to the district and helped organize many of the event’s indelible touches.

The kids started in the Rebels’ football locker room, toured facilities and put on jerseys with their names assigned to their numbers for Murphy on the stadium’s speakers. Hunt, like his predecessor George Quarles, the man with whom Hunt had quarterbacked Maryville to a state championship, doesn’t conjure up many Vince Lombardi-esque pregame speeches. He did on this night.

“That was my first pre-game speech all year,” Hunt said. “It’s not my cup of tea, but I felt I needed to do that. We walked out through the stands and in front of the parents, just like the Rebels do, and cheerleaders made a sign that the kids ran through.

“It being our first year, I really couldn’t have dreamed up a better night for our kids, and we had an absolute blast.”

Joe Robinette, a veteran Maryville teacher and assistant coach, was among the dozen or so coaches who participated in the event.

“Personally, I’ve had several of those kids in class and I guess I take for granted that I’m part of this program. Sometimes you stop and realize how many people look at where you are and say ‘What a blessing. How cool,’” Robinette said. “It gave us an opportunity to let them in, to experience some of it and be a focal point of it. I was just so humbled by how hard those guys and girls went that day to get to do something they never thought they had a chance to do. I could see it inspired them; it inspired me.

“I stood there and could hardly operate for the inspiration I was getting and the mist in my eyes; stood there in tears the whole time thinking about times I had not tried my hardest. It inspired me. And it all goes back to how you treat other people.”

What began as a trip for Hunt, then an assistant basketball coach and a handful of hoops players has evolved into two trips this past summer that featured a girls’ outreach program and the fourth-straight boys’ iteration. Maryville has sent roughly 80 student-athletes on the trip across the previous four years. 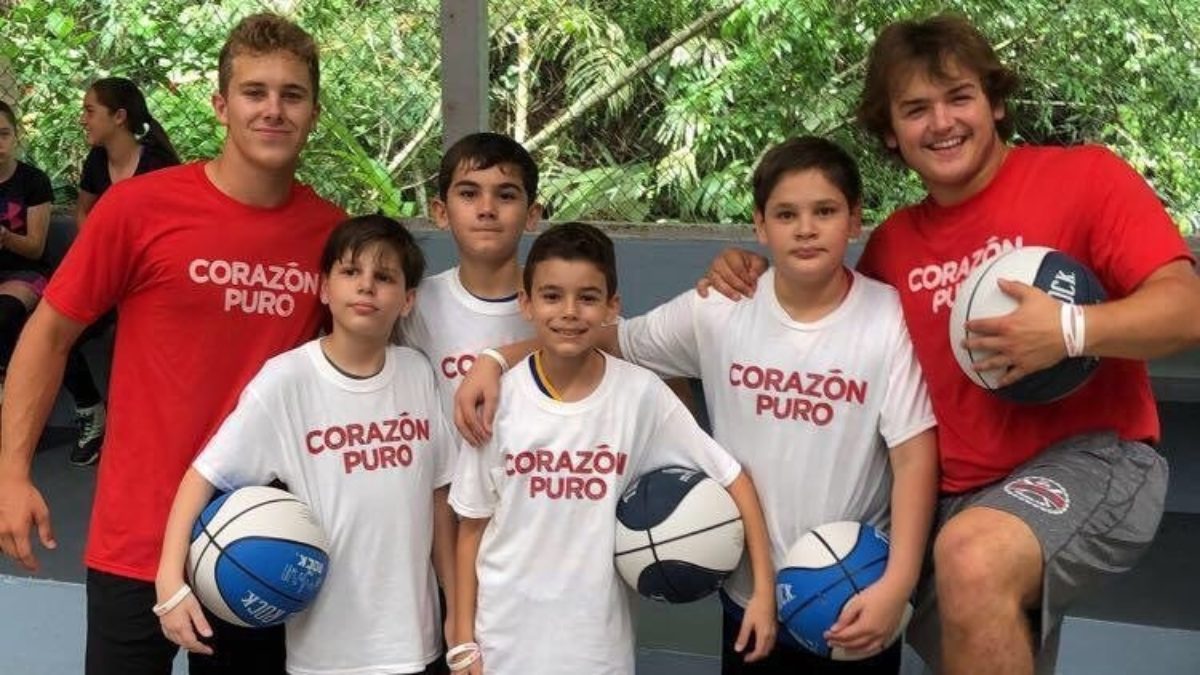 It’s the inclusion of athletes from myriad girls’ and boys’ sports that resonates with Hunt.

“Basically, our agenda is that we’re there for a week, and every morning we do at least one community/village/elementary school and do kind of like a sports camp and a Vacation Bible School camp all in one,” Hunt said. “It was a really, really cool thing and obviously some places we go to don’t have much. So we’re giving out basketballs and shirts and bracelets. Anything we can.

“It’s kind of what makes it so awesome. We’ve been able to have female coaches in our district go with us, and FCA reps go with us and want to be a part of it.”

The Rebels stay on farmland owned by Maryville pastor Jerry Russell, whose son, Jeremy, is a Maryville assistant coach. They’re housed in a “hostel-like” building on the farm during their weeklong stay, which seems closer now thanks to a new direct flight from Atlanta to San Jose, Costa Rica.

“We had another team come in and ask us about us how we run things and do things at Maryville, and by their questions I could tell that they were wanting some magic set of Xs and Os to make their program better,” Robinette said. “We operate so differently than that. You can invest all the resources your school and parents will let you have in order to come up with the greatest football rhetoric and plays and practice and schemes, and it will work to a degree. And you may do that and scholarships will come, maybe elevate the life of two or three guys a year or 10 players over four years. And that’s worthy.

“But if you take some of those resources and invest in the men and women in your community who can teach a better way to be a man, husband, son, business comrade or employee, then you have elevated everybody on that team. I think that’s kind of the way Derek goes about it and he adds a spiritual aspect.

“It’s not necessarily about saving your soul, walking down in front of the church, though we’ve had that, but I promise these principles are going to improve your life and the lives of people around you in the community.”

That may be the true Maryville football experience.