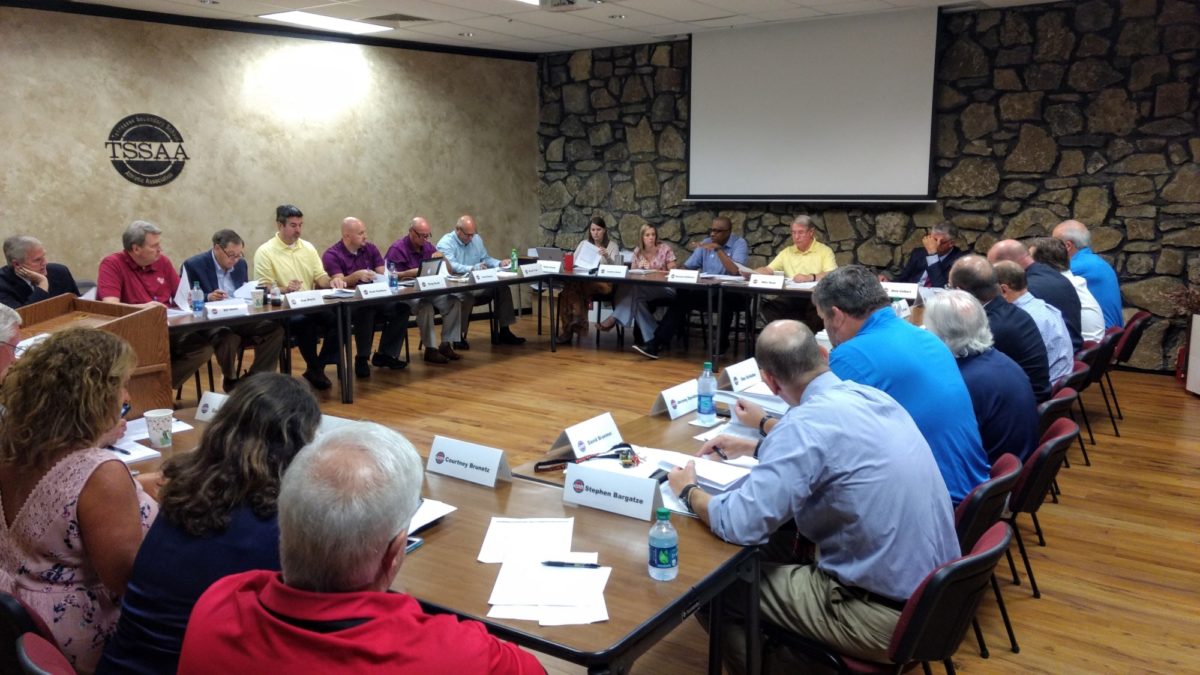 The TSSAA Board of Control met on Monday, August 19 at the TSSAA office building in Hermitage.

The Board reviewed and voted on approval of financial reports for Spring Fling including the sports of baseball, softball, soccer, track & field and tennis. The financial statements and audit report for the 2018-2019 school year was reviewed and approved by the Board. The Board also approved the proposed budget for the 2019-2020 school year.

Skyuka Hall High School, a private school in Hamilton County, was accepted as a new member for the 2019-20 school year. The school has been in existence for six years and is a Category 3 school accredited by SAIS and TAIS with a total 9-12 enrollment is approximately 50 students. They plan to participate in all sports sanctioned by TSSAA except football, tennis, and wrestling. They will compete in the Division II, East Region in bowling and in Division II, Class A, East Region, District 2 in baseball, basketball, cross country, golf, soccer, softball, track and field and girls’ volleyball.

Four member schools appeared before the Board of Control to appeal sanctions placed on their athletic programs due to unsportsmanlike incidents that occurred last school year.

Antioch High School was present to appeal the sanctions placed on the school on November 1, 2018, due to the incident that occurred between John Overton High School and Antioch High School during their football contest on October 26, 2018. The Antioch principal presented the initiatives they are taking in regards to sportsmanship. The Board voted to lift the restrictive probation that was initially placed on the school, which means they will now be allowed to participate in the football playoffs this season. The football program will remain on probation for the remainder of the 2019-20 school year.

Scotts Hill High School and Melrose High School each appealed restrictive probation placed on their boys’ basketball programs for the 2019-20 school year due to separate unsportsmanlike incidents that occurred during the boys’ basketball season last year. After hearing what actions the schools implemented since their respective incidents, the Board voted to lift the restrictive probation sanctions that were initially placed on both Scotts Hill and Melrose, which means they can each participate in the basketball postseason this year. The basketball programs of both schools will remain on probation for the remainder of the 2019-20 school year.

Haywood High School was present to appeal the sanctions placed on the baseball program due to an unsportsmanlike incident that occurred during the baseball contest against Sequatchie County High School on Wednesday, May 22, 2019, at the TSSAA Spring Fling.

Haywood High School informed the Board they had suspended coach Dusty Rhodes for 10 regular season games and all post-season games of the 2020 season and Coach Rhodes will not be allowed to travel or practice with the team during his suspension for the regular and postseason. The Board voted to remove the restrictive probation placed on the Haywood sports programs, but the Haywood baseball program will remain on probation for the 2019-20 and 2020-21 school years.

The appeal by Westwood High School in Memphis has been rescheduled to the November Board meeting.

The full Board agenda can be viewed below.