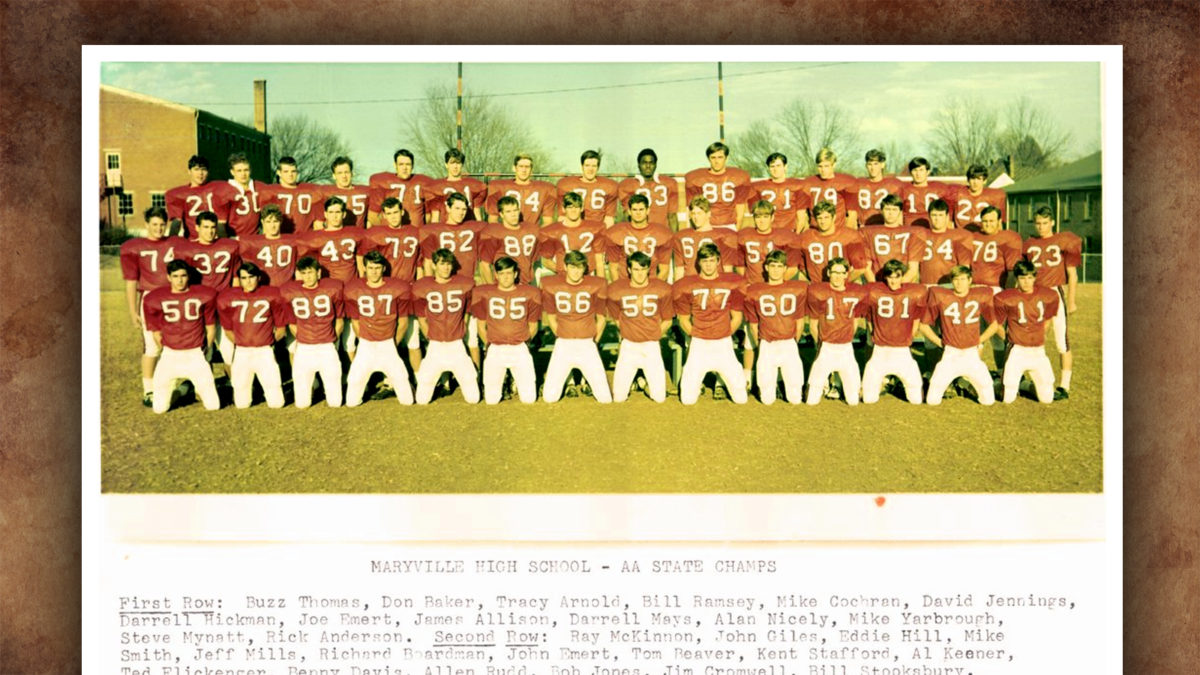 Second in a series of articles about the 1970 football champions.

They notched two of the most convincing wins seen to that point in the fledgling TSSAA playoff series.

They outscored their opposition on the season by a whopping 305 points in just a dozen games – an average victory-margin of 25.4 per contest.

More importantly, the 1970 Maryville High School Red Rebels set the state championship standard that has continued to this day for Tennessee's high school program with the most all-time wins in football.

“The 1970 team was the one that started it for Maryville,” said Furman offensive coordinator George Quarles, who led the Rebels to 11 titles between 2000-2014. “They were the players and coaches who set the standard for so many teams to come.”

In addition to the team's talented roster, a mix of skilled, athletic players and rugged, hard-nosed linemen, Maryville arguably had one of Tennessee's all-time top trio of coaches on one staff. The Rebels were led by head coach Ted Wilson, with Benny Monroe as offensive coordinator and Don Story as defensive coordinator. All three coaches earned a great deal of success throughout their careers, with Monroe helping the Cleveland High School program ascend to unprecedented heights after his arrival to helm the Blue Raider squad.

“Top to bottom, that's still one of the best teams that Maryville ever had,” said Lynn Brown, a former Maryville assistant who never lost to rival Alcoa in a dozen years on staff and a 2007 TSSAA Hall of Fame inductee. “It was something special.”

After being mostly dominant in 1969 but suffering a 20-point loss to Oak Ridge and a narrow defeat to rival Loudon, the Rebels started what evolved into their first championship march with a dominant win against Rhea County, 48-12.

Four of their first six opponents were limited to six or fewer points.

More importantly, Brown noted, was that Maryville had been climbing as a program to this point.

In fact, Brown recalled Monroe once pulling him out of the classroom to take a look at the Rebels’ eventual championship quarterback Tommy Beavers – as a middle schooler.

“I'm teaching at the junior high, a math class, and Benny comes to my classroom and says, 'Come here, come here, come here!,'” Brown said. “I told him, 'I can't leave my class.' And he said, 'You've got to come see this. This seventh-grader can throw the ball 60 yards.'”

That moment was a precursor to Beaver's guidance of the program. Yet that 1970 squad also was socially historic as well.

“I really got close to Troy,” Brown said. “He was the first Black player to really play football at Maryville High School. Gary Burchfield and Steve Mynatt were halfbacks. We ran out of the wishbone and split-back some. Bob Hood was a really good player for us, and he ended up becoming a Navy S.E.A.L.”

Maryville's toughest test along the way happened to be with defending state champion Loudon in the seventh game of the season, after the Rebels had peeled off six-straight wins by outscoring their opposition by 174 points.

Everyone at the time knew that the victor in this game commanded inside position for one of only four statewide playoff berths.

“We had a really tough game with Loudon in the regular season, after they had won it 1969,” Brown said. “We beat them, 35-28. We beat out Knox Holston for the playoffs, even though we both were undefeated. Back then, I think Holston had played somebody in a class below them so we were the qualifier based on the points system.”

The opening postseason triumph against Lafayette High (the school now known as Macon County) and the first playoff win of now more than 130 for the Red Rebels, came with a unique film-swap.

“We played Macon County in that first game at Lebanon and Jim Satterfield was the coach at Trousdale County, one of their rivals,” Brown said. “We got our films from Satterfield, and I remember he told us, he'd give us the films on one condition: He said, 'Beat them as bad as you can possibly beat them.' We kind of called them off at the end and he said, 'You didn't beat them bad enough.'”

If that moment was unique for its backstory heading into the playoffs, what happened in the actual title game against Cleveland High School has remained a bit of bizarre lore through five decades.

“Spectators came off the side of the field,” Brown recalled, “and one of them tackled Bob Hood in the end zone. They, of course, threw the person out of the game. Bob Hood scores and this guy just tackles him, a spectator not even involved in the game.”

Maryville's ball-carriers weren't tackled too well that night, as it steamrolled to a 42-14 championship win.

It's a team that has stood the test of time in the football-rich community nestled against the Great Smoky Mountains and just a few miles from fellow powerhouse Alcoa.

“A lot of folks who have followed Maryville football for a while still talk about the 1970 Maryville Rebels,” said current Maryville head coach Derek Hunt, a state championship-winner for the Rebels as both player and coach. “One of our current teachers, Bill Stooksbury, played on that team. I've heard some people say that they believe that group ranks up there with the best teams of all time, even with all the success Maryville has had the last two decades.

“Obviously, they had to be very impressive.”