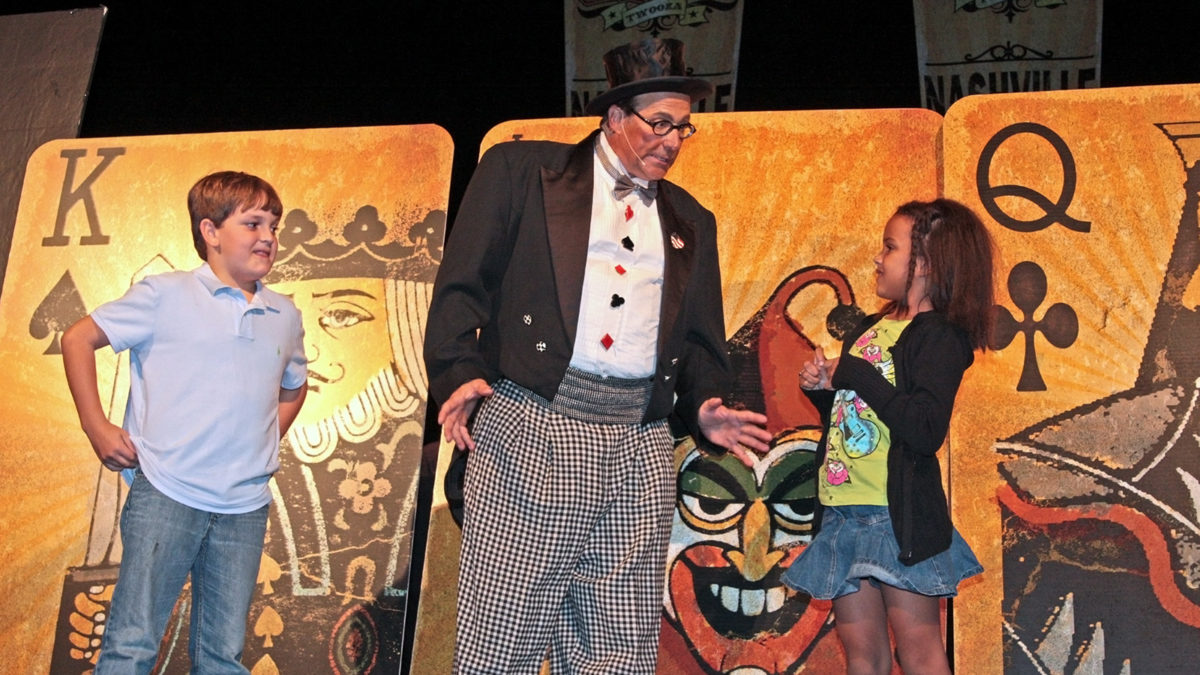 Magic of Stephen has impact beyond words

Longtime TSSAA program focuses on kids and the struggles of youth

Sometimes, a picture shows what no words can.

And yet, also, a letter filled with words from the heart can paint an image that resonates far beyond any still image.

Like the one the Tennessee Secondary School Athletics Association received near the onset of this 2019-20 school year from a Morgan County educator that read as follows:

“Tennessee Highway Safety Office, thank you for sponsoring the Magic of Stephen Bargatze for our teacher’s inservice here at Morgan County Schools on Tuesday, July 30. I believe that he was the most interesting, entertaining and inspiring back to school speaker we have ever had in my 27 years of attending these in-services.

I was so entertained by his comedy, moved by his story and amazed by his magic. It was a very energizing show. Thank you again for your support of Morgan County Education, teachers and students.”

Or the one from Tony Clower, Middle School Supervisor of Roane County Schools, in January 2018:

“Mr. Childress, I just sat in on Stephen’s presentation this morning at Midway High School. He has been in several of our schools this week. After sitting in on his presentation this morning, I do not know why every school in this state wouldn’t have him in their school. It is without a doubt the most powerful student assembly we can offer our students. Thank you and the TSSAA for helping make this available. I sat and watched 9th graders not move a muscle or make a sound as Stephen shared his life story; very moving and powerful. Thanks again!”

There are a bevy of these emails and letters through the years, emanating from the impact of The Right Team and the Magic of Stephen.

But what is The Right Team and who is Stephen? Well, take a look at the words of former TSSAA Executive Director Ronnie Carter as you consider those questions.

“The impact is statewide and the impact is bigger than sports,” Carter says. “Sometimes we think sports is the end-all and the greatest thing going, but then you realize the impact of this program is the world. Stephen’s the most visible person in the TSSAA, the best thing we’ve got going and the impact is beyond words.”

The program traces its roots to the 1990s and a partnership at the time with Baptist Hospital to blend Bargatze’s world-class entertainer skills – his opening credits include Garth Brooks and Barbara Mandrell – with a transcendent message. The program is now sponsored by the Tennessee Highway Safety Office.

The Right Team and Magic of Stephen is rooted in the following tenets, per its mission statement:

Suicide. It might be a tougher subject than drugs for many to broach, and yet Bargatze speaks it from the heart.

A world champion magician whose son, Nate, is a best-selling stand-up comedian with his own Netlfix special and tour, Stephen hits the suicide talk head-on because he is a survivor of a suicide attempt. Two of them, if we’re being exact.

After sitting in on his presentation this morning, I do not know why every school in this state wouldn’t have him in their school. It is without a doubt the most powerful student assembly we can offer our students.

“When I was in high school, I attempted suicide twice,” says Bargatze, between performances during one state barnstorming tour last month. “One time, it was probably just to get noticed and one time it was very serious. I believe in all my heart that if not for God, I would not be here. Through all that, I ended up in Nashville with my cousin Ron. He brought me in, took me to his house and, really, he showed me what a normal family is.

“So I get to share about my life and what I was going through when I tried to take my life. And it’s really been life-changing to me with this program. I had a kid one time tell me, ‘I was going to do it today’ and he said, ‘Thank you for coming, you stopped me.’ I kept in contact with that kid for more than a year afterwards. And I’ll still hear from him and others, who get ahold of me and say, ‘Thanks.’”

It takes a spreadsheet to sift through the schools that host Bargatze & Co., and it reads like an old Vol Network promo, “From Memphis to Mountain City.”

More than 300,000 kids just in the past decade, typically in breathless anticipation; more than 133,000 in just the past four years.

“I think he has turned a bad situation into a positive and had such an positive impact on other peoples’ lives,” says Courtney Brunetz, TSSAA’s Director of Marketing and Coordinator of the Right Team and Magic of Stephen. “He can relate to these kids. We don’t know all that they’re going through. He’s been there and can relate. He’s real.

“He’s a big-time magician, performed for famous people, won national and world competitions, been invited to the White House for Easter, but he’s so down to earth. He’s had a hard road and has been through it and gotten to the other side and now he’s able to share with kids and make them see there’s a way out.”

Schools across Tennessee simply send an email to Brunetz (marketing@tssaa.org) to get the wand waving on scheduling Bargatze’s act; not that organizations necessarily need to plant roots in Tennessee for Bargatze to perform.

Some years ago, Steve Endsley was seeking an end-of-the-year speaker for his Illinois Elementary School Association’s school-year-ending celebratory luncheon.

Doing his friend a solid, Carter suggested Bargatze. Endsley wasn’t so sure.

Thirteen years later, nobody has usurped Bargatze’s spot at the event.

“Stephen’s story is incredible and for him to relate his story to junior high kids so that they can understand people do have struggles and do overcome their struggles and be successful is what Stephen does so well,” Endsley says. “Somehow, he gets his message across to kids and they totally understand and are able to relate to him. I’ve been so fortunate to have him be our speaker at a student recognition event for 13 consecutive years and I’m already looking forward to it again.

“I bring him up every year and he has become a very good personal friend but at the same time, he is such a motivator. He tells a great story and obviously he’s lived a lot of life. He’s just able to relate to a whole group of people, to those who are successful, to those who need to hear a message, to those who need to understand that you have to look out for your friend and fellow people. The thing I walk away with all the time is how much he helps me. Every time. I’ve heard the stories, I’ve heard the jokes and I’ve heard the message and I still get something out of it every time he talks.”

Why does Endsley find that the Right Team and Magic of Stephen message resonates annually? Mostly because it is timeless. Cool kids, popularity and life struggles aren’t once-in-a-generation; they’re every single one.

“I think what Stephen does, is he is able to communicate to kids that it’s OK if you’re struggling a little bit. It’s OK that things aren’t going your way, and if they are not going your way, ask for help and it’s OK to ask for help,” Endsley explains. “And if things are going your way, and this is where I think the real value comes in, when you see someone struggling, you go help that person. If you’re an athlete, invite them to a ballgame; invite them into your circle of friends, to sit at the table with all the athletes and popular people and do whatever it takes so that person doesn’t feel out on their own. In essence, he is saying to those who are popular, you need to help others and to those who don't seem as popular, it’s OK. He’s reaching the Alpha and Omega in the same message, so to speak.” 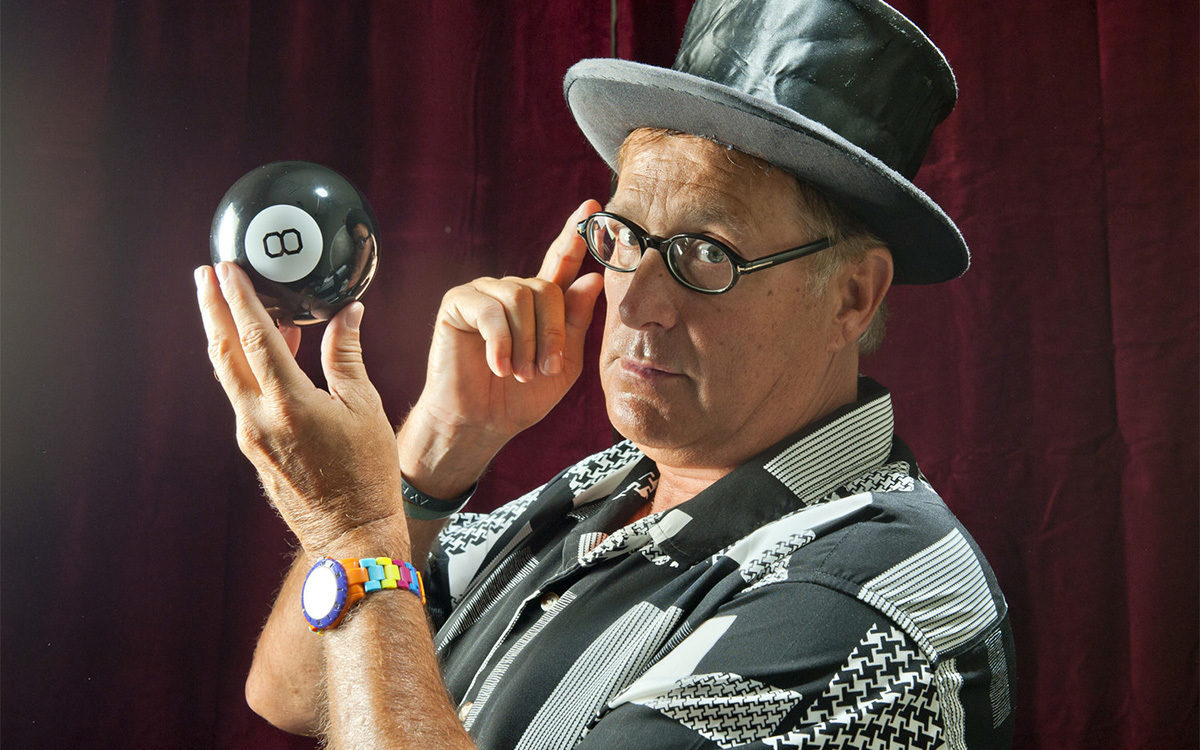 It is the kids who linger, not necessarily always the ones whom Bargatze incorporates into his program, who keep the veteran showman relentlessly engaged in helping youth.

“You know, the rewarding part is not only is it my passion but I think that it's my purpose,” Bargatze, whose father was an abusive alcoholic, shares. “It always goes back to being that kid that was lost and didn't know what I was doing here on Earth. It’s sharing that story and connecting with kids going through some of the same things I went through. This is what I should be doing, this is what my purpose is. And the bottom line kind of hidden in all that, I want people to also realize that TSSAA is a great group of people that cares about them.

“When I was a little kid, I was left-handed. I went to Catholic school and they used to beat us for being left-handed. I threw with the wrong hand because I didn’t want the teacher to hit me, and he said, ‘Hey man, you throw like a girl.’ I didn’t know it was OK to be left-handed. I just thought I wasn’t smart enough to use my right hand.

"My junior year, I was helping clean rocks off the football field and they said they needed some kid to be in underwear and dance around in a play. My class was just background people, but my teacher turned to me and said, ‘Hey kid, you’re funny, will you do this?’ It was really the first time I heard that kind of laughter where you say, ‘OK. This is good, this is what I want.’ It changed the course of my life, that one little experience. And it reminds me how simple our words are. Two teachers, one said you throw like a girl and one said hey you’re funny. Both impacted my life.”