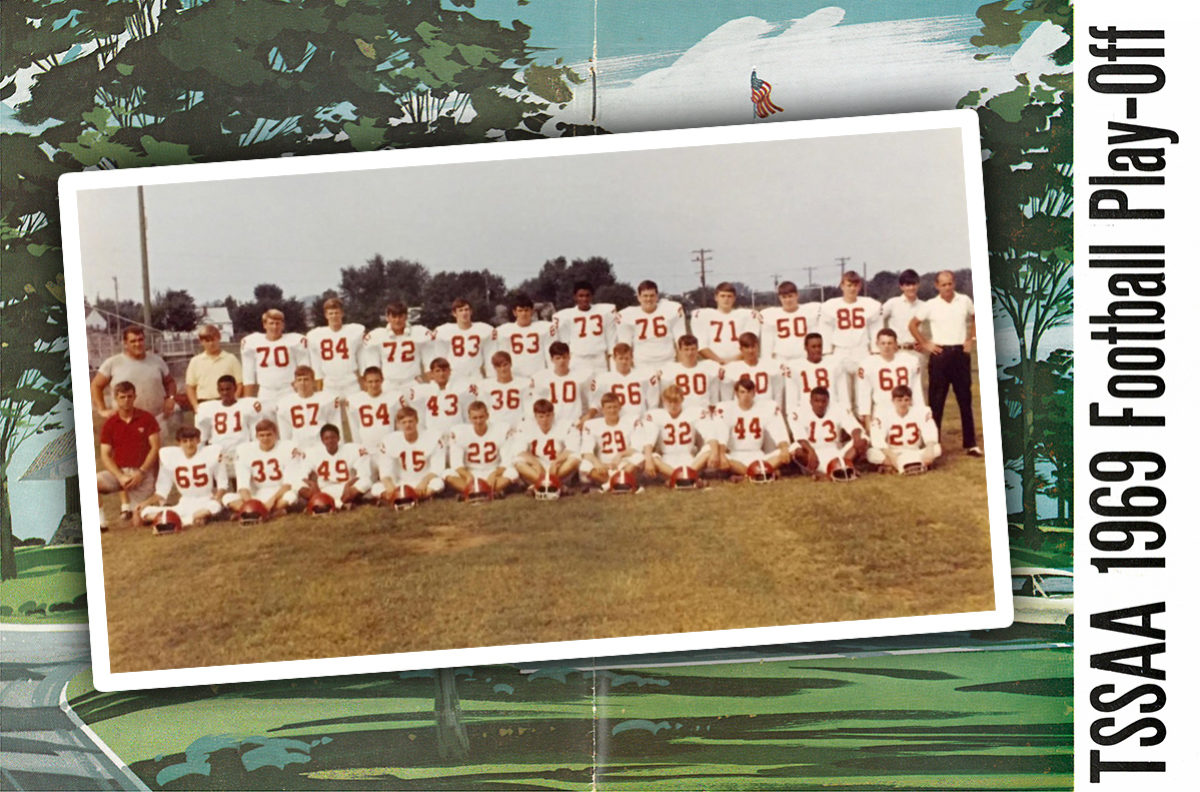 Entering into the 1969 season, with speed aplenty and innovative future TSSAA Hall of Famer Bert ‘Chig’ Ratledge as coach, Loudon High School got a little radical on both sides of the football.

The Redskins overhauled their offense. They did the same with their defense. And they more or less ran roughshod over the competition en route to claiming Tennessee’s first-ever Class AA football championship.

“We were a Wing-T offense, 50-defense team and we went to the veer offense and the split-four defense,” said Gary Dutton, an assistant on Loudon’s ’69 squad and later the school’s principal, “and nobody – NOBODY – was ready for either one of those things.

“Part of it was we were blessed with some good athletes and good speed, and part of it was that we were just so far ahead for one year, they just weren’t prepared for us.”

Their historic effort extended well beyond just capturing the inaugural playoff championship in their classification; they brutalized opponents week in, week out.

Film breakdowns and scouting reports at the time were far more rudimentary and technology didn’t afford opposing coaches to do much in the way of analyzing Loudon’s tendencies.

The team, Dutton noted, only ran a handful of offensive plays --- “one of our players joked that we only had about six plays” --- but capitalized on superior team speed. He noted they had nine players who clocked 40-yard dash times at 4.8-seconds or lower.

They installed their revolutionary offense with the help of the University of Tennessee coaching staff, and they got their new defensive identity from Auburn by way of the now-defunct Tennessee Military Institute.

“Homer Rice was running it out at Houston, and UT’s coaches went out there and learned the offense but never put it in,” Dutton said. “They kind of helped us with it and got us started with the split-back veer and we just kind of learned on the go with it.”

Added Loudon athletics director Ronnie Roberts, a former football assistant coach among his myriad of roles with the school, “nobody really knew how to defend the split-back veer, and he also went to a split-4 defense and nobody knew how to deal with that.

A coming-of-age moment for Loudon came in a heated tilt against Cleveland, which entered the game on a double-digit winning streak. Loudon pounded the Blue Raiders, 20-0.

By the time the playoffs rolled around, neither team --- Knox South in the semifinals, nor Humboldt in the title game at Loudon --- so much as mustered a point against the Redskins.

Loudon captured its first of three state titles in less than a decade by a combined 58-0 score.

“South ran the dive to Steve Chancey and Jake turned him upside down on his head and the game was (effectively) over,” Dutton said. “And Steve went on to be a star at UT. When Steve Chancey’s head hit the ground, that game was over. We called ’em off in the fourth quarter.

They also were a community rallying point.

It was commonplace, Dutton explained, for Loudon to have a crowd of folks on hand during its Thursday night practices before games.

The day before the title match on Loudon’s own turf? Well, it was almost like a game crowd.

“That Thursday night, I bet we had 250 people at practice,” Dutton, one of only three coaches on staff alongside Ratledge and Buddy Wendell, said. “The community, it was just unbelievable.

“Our community sent that Loudon team to the Gator Bowl (after winning the state title), and that was the year that (Doug) Dickey left (Tennessee to become head coach at Florida). Our town, we had been a pretty good football town.”

The community embrace has been nearly as lasting as those title memories, Roberts said.

“There’s no doubt, Loudon is a small town, a community town,” he said. “The whole town rallies around stuff like that. I can remember when I played, it was always just a big deal in the community.”