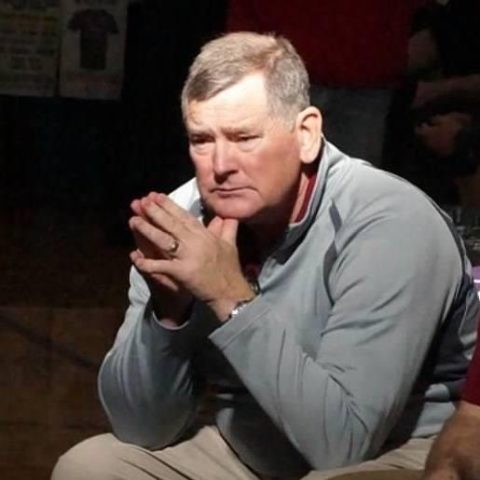 Wrestling's been a part of Frank Simpson's life, well, almost longer than he can remember.

The legendary Montgomery Bell Academy coach first wrestled in high school at Father Ryan, then collegiately at MTSU and since has logged more than four decades in the sport that he grew to love from a mere happenstance event.

“I actually saw my first wrestling match in 1968 when I went and watched Father Ryan wrestle Notre Dame,” Simpson said. “At that time my oldest sister (Sue Ann) was dating a wrestler at Ryan, and I thought it would be cool to see what wrestling is all about.

“The rest is history. Fell in love with the sport that night.”

Since then, Simpson – and his brother, Patrick, Father Ryan's wrestling coach and a former national wrestling coach of the year – have been intertwined with the sport in the Volunteer State. For these reasons and myriad others, Frank Simpson is the TSSAA's Distinguished Service Award recipient for the month of December.

Frank has spent more than a quarter-century at the prestigious MBA, a school that demands in all facets the discipline Simpson expects from both his wrestlers and himself.

This year, however, is a new role for the veteran coach and MTSU Wrestling Hall of Famer.

This year, son Patrick Simpson is MBA's head coach. Dad is the assistant.

“Having Patrick there, it's been an easy transition for me probably because he's a lot like his dad,” said Simpson, who began his career as a 98-pound wrestler and finished it at 142. “He's been a great asset as an assistant coach, has done all that I've asked him to do and more. So that's been a pleasure to work with him and seeing him grow as a young teacher and coach.

“I just felt it was time to give him the reins and let him start being the head coach. Our school has been very good about letting Patrick take that role. I'm sure a lot of people would have loved to have that job, but they felt like they had the right one with Patrick and we work well together. The kids have accepted Patrick as their head coach and look up to him. I enjoy seeing him taking that leadership role. He's going to be very successful, too.”

The elder Simpson's presence and success have been synonymous for so long at MBA. It's hardly gone unnoticed.

“Frank has been an institution at MBA,” said Brad Lampley, his son, Jackson, a former MBA football All-America selection who signed with Tennessee, and who has served on the Nashville Sports Council and Tennessee Sports Hall of Fame boards. “What he has done with the wrestling program has been incredible, but what he has done in helping shape these young men into productive citizens, husbands, fathers is truly remarkable.

“MBA has been richly blessed by Frank Simpson and his family.”

Simpson cares little for any spotlight. He wants the focus on the kids, be it his wrestlers or otherwise. This COVID-19 pandemic year is unprecedented, even for someone whose love for the sport stretches to the late 1960s.

“Obviously wrestling's been my expertise and it's just working with the kids and seeing the kids grow,” said Simpson, one of nine kids growing up and who, with wife, Margaret, have 10 children. “Most of the kids that I get have never wrestled before and my philosophy in coaching has always been to not build just wrestlers but build men of good character. A lot of people have asked me who's your most successful wrestler, and it's not always the state champions and guys who achieve the most on the mat. It's what I see in them 10, 15, 20 years down the road, good family men, married with children and doing a good job. That's what I consider success.

“The pandemic has really been a stressful year for not just me as a coach but it is for every coach. It's put a lot of extra pressure on the coaches to keep the kids safe, so that they can continue to compete.”

Father and son have worked diligently on the program's COVID-19 protocols in order to give this season's MBA squad its best opportunity for maximum competition.

“We've worked very well together putting in the protocols that we have to try to keep our boys safe,” said Simpson, whose five sons all wrestled for him and three of whom wrestled collegiately at West Point. “It's a difficult year trying to get matches and keep a schedule.

“We keep moving forward, and the big thing is our kids on our team understand the times that we're in and how we're trying to keep them safe and still have a season. It's been difficult for every coach in the country, but I'm proud of our kids.”