Inscho, Johnson and Trussler recognized for half-century of officiating

They each have logged 50-plus years on football fields and made contributions to high school athletics in the state of Tennessee far beyond the gridiron.

Yet the final trio of officials to be recognized during the 2019-20 school year by the Tennessee Secondary School Athletic Association for their five decades of service – Paul Inscho, R. Mike Johnson and Steve Trussler – come from diverse backgrounds and carry with them lifetime memories of their officiating endeavors.

“I did baseball for 18, 19 years, but football is what I love,” Johnson said. “I’ve got a lot of fond memories of good times through the years.

“I’ve got some coaches across the state that like me and some that hate me, but I wouldn’t trade the experience for anything.” 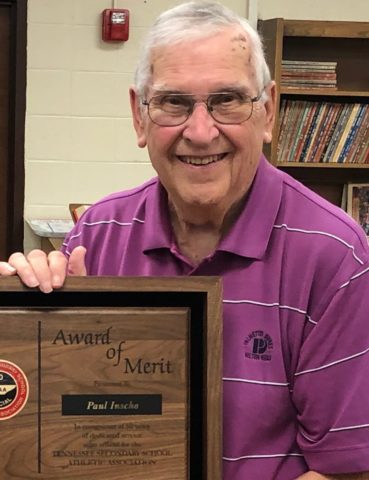 Death couldn’t keep Paul Inscho away from the gridiron. Not even the tragic stopping of his own heart.

It was the season-opening football game of the 1996 season for TSSAA members, a warm late-August Friday night, and Inscho has never had recollection of anything beyond the opening kick.

“I had the first game of the season between McMinn County and McMinn Central, and I had a heart attack and died,” Inscho, a New Jersey native who graduated with a B.S. in Chemistry from Lafayette College and earned his Master’s from Lehigh University, said. “I literally died. No pulse. If it had not been for the doctors who were there, and some people in the stands, including a nurse anesthetist who came out of the stands and began working on me immediately, I would not be here. They did CPR on me for approximately 15 to 20 minutes until the ambulance got there. They shocked me seven times before they got a pulse.

“They took me to Woods Memorial Hospital in Etowah and kept me overnight, before LifeStar flew me to UT Hospital the next day. I was there at the hospital for a week, but the interesting thing is that I have no memory of any of this. My last memory of the game was the kickoff, and the heart attack happened about three minutes before halftime.”

A former collegiate chemistry professor who also had worked at Princeton High School in his native New Jersey, Inscho could not drive for a full month after his dismissal from the hospital in the recovery process from the heart attack and subsequent surgery.

But his cardiologist, Dr. James Yates, helped Inscho forge a path back to the gridiron.

“He said, ‘You have a football career as an official don’t you? On Friday nights, I want you to go with them to the football games. Don’t do anything, but go with them,’” Inscho, a former trained EMT, recalled. “In 1997 they allowed me to run the clock as the clock operator. (Before the 1998 season), Dr. Yates said he had talked to other doctors in the group at UT about me returning to the field, and they said it was my decision but that I could go back on the field.

Inscho points to lasting memories of calling a game featuring star player Hubert Simpson, an eventual University of Tennessee standout, and McMinn County against Baylor, a 14-7 thriller that featured an overflow crowd and remarkably clean game with just a single penalty, declined, the entire night. He also harkened back to a couple of BlueCross Bowl assignments that included the infamous 1989 “Ice Bowl.”

“I used to get almost teary-eyed thinking about how or why or what?,” Inscho, a former Monroe County School Board member, said of his remarkable journey. “But I said, ‘Just be thankful and do the best you can.’ And that’s how I’ve looked at it.

“I have always had great help and cooperation and support from administrators of the TSSAA. Richard McWhirter wants it done right. Gil Gideon, way back, and Ronnie Carter. They have all been great, supportive people. And it has always been a very good experience for me.” 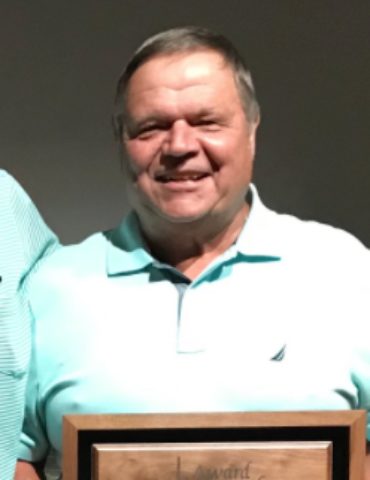 A Nashville native who attended David Lipscomb for both high school and college before garnering a Master’s from Tennessee State University, R. Mike Johnson wasted no time in transferring his love of athletics into the realm of officiating when he started at the age of 19.

“My first game, as a matter of fact, was a baseball game,” said Johnson, who retired from the state of Tennessee after a long career in education that spanned stints as a science teacher, vocational agriculture and horticulture instructor, as well as work with the Tennessee Department of Corrections. “They had talked me into joining the Metro Nashville Board of Parks and Recreation and told me to go do a baseball game. I did it and liked it. Fall came around and a buddy of mine at Lipscomb said to go with him and call some flag football games. That’s just how I got into it. I’ve had a couple of PeeWee Leagues that I’ve worked for and did a little bit of college officiating as well.

“Calling college games takes too much time and my age had sort of caught me at the wrong time, too. I mostly had some NAIA and OVC-level college work.”

In addition to BlueCross Bowl title bouts that featured Germantown against Lincoln County and Maryville against Melrose, Johnson recalled a bevy of semifinals contests that he found lingered in memory as arguably greater experiences than the title games.

Ones like the fabled Knox Central-Oak Ridge overtime-thriller from the early 1990s.

“I’ve had so many semifinal games, those are the good games and the one that I can remember the most was AAA, I believe, Knox Central vs. Oak Ridge, 42-41 in triple-overtime,” Johnson said. “We were escorted to the field and off the field with six policemen. It was a packed house around that field at Oak Ridge. Great atmosphere. And I know those kids loved it.

“Another one was at Covington, they had those motorcycle shops down there and they would ride those big choppers around the track and that got everybody wild.”

Johnson worked his first decade as a TSSAA official as a linesman, but he volunteered for the role of umpire and remained in that demanding position throughout the rest of his career on the gridiron.

“I started umpiring in the 1980s, and I’ve been there all the way through,” Johnson, with strong support from his significant other, Mary, across the past two decades, said. “I never looked back, I got asked to go referee and I said, ‘Nah, I’m a No. 2 man, not a No. 1 man.’

“But the love of the game and the camaraderie of the guys and helping the younger officials when they come in keeps me going. The better half, she likes the game, too. She knows on Friday nights that’s what I’m going to do, but on Saturdays and Sundays and the rest of the week, that’s her nights.”

Johnson has seen the trend of state associations throughout the country struggling to fill their officiating needs; he knows the job is a demanding, but rewarding, vocation.

“You’ve got to put your time in,” said Johnson, now primarily a clock operator. “That’s the way it works, and I think that’s the reason I’ve done well in officiating. You have to be willing to go to meetings, listen and watch and learn.” 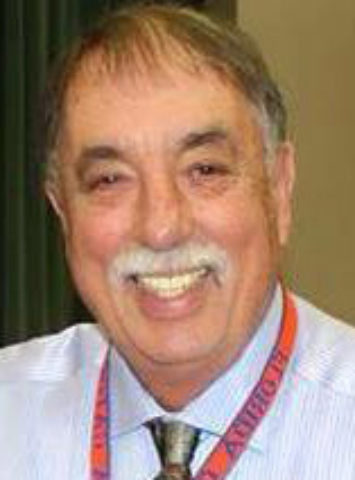 Stack all the days in a decade; there’s roughly 3,650 turns of the calendar. Steve Trussler can fill them all with the nights logged working TSSAA events as an official, umpire or otherwise in more than 50 years’ service to high school athletics in Tennessee.

A native of the Gainesville and Jacksonville areas of Florida, still with the Florida Gators’ fight song as a ringtone to this day, Trussler’s time in the Volunteer State extends back to his college days of attending and graduating from David Lipscomb University in 1968.

He never left Tennessee and once he got started officiating contests, Trussler likewise never left that role.

“I kept a record, still got it, and I’ve called right at 4,000 dates in the 50 years,” Trussler said. “I did basketball, baseball, football, and softball since its inception in the mid-80s. I’ve written down every assignment, worn out three or four cars, at least. I just stayed active and always had a smile on my face. I was never on time; I was always early. And I always acted like I wanted to be there, because I did, and I always wanted to be professional and have fun. And with the kids and the coaches and fellow officials I’ve met over the 50 years, I wouldn’t take anything for it. Hundreds of friends, close friends that I’ve made. That’s really what keeps you going. And you’ve gotta love kids or you can’t do it the right way.”

Trussler explained that an inability to hit collegiate pitching on the diamond mandated his adaptation of learning sports from the viewpoint of those behind the scenes. He umpired preseason baseball scrimmages; served in various roles of student-trainer and manager and assisted Lipscomb athletics in any possible manner.

“When I graduated, I joined the local officials under A.F. Bridges. and I just fell in love with it,” Trussler said. “I learned from the best. Earl Crowell, Gabby Street, Bill Pack Sr. I learned the game from then. They taught me that I better learn the rules and I better know how to enforce them.

Trussler logged not just 50 years of officiating but also a five-decade tenure as an employee of the State of Tennessee. He worked 40 years in child protective services and public welfare before he added a decade as a public educator and administrator in both Grundy and Marion counties. Trussler was a recipient of the TSSAA Athletic Director of the Year award in 2018.

In addition to his longevity as a football official, Tressler has worked 15 TSSAA Spring Fling championships, can recall his early basketball work in six-on-six girls’ hoops and helped officiate a BlueCross Bowl football championship in Cookeville. He can recall an early football assignment that netted a $5 payday.

He and wife, Wilma, have been together since their days at Lipscomb and raised two sons, former NCAA collegiate athletes, Jay and Jon.

“I’m blessed,” Trussler said. “I still go to basketball and baseball and softball meetings, even though I’m not on the field. It’s just something that gets in your blood and you love it so much, it just stays with you. And that’s not happening anymore. A lot of younger guys can’t take the hammering from coaches and fans or the 200-mile roundtrips at night in fog and sleet and they get out of it. But it’s just a great profession; I’d recommend it to anybody. When I met Wilma at Lipscomb, I told her, ‘I love sports and I love kids, and this is what I’m going to do.’ And she never complained. We’ve stayed married 50 years with me gone all those nights.”

“There have been a lot of changes,” Trussler said. “Three or four uniform changes, scores of rules changes. It keeps evolving and keeps evolving toward increased safety for the players.

“But I hope I can stand on that sideline and run that clock for Mr. (Ken) Pack for another 10 or 15 years.”