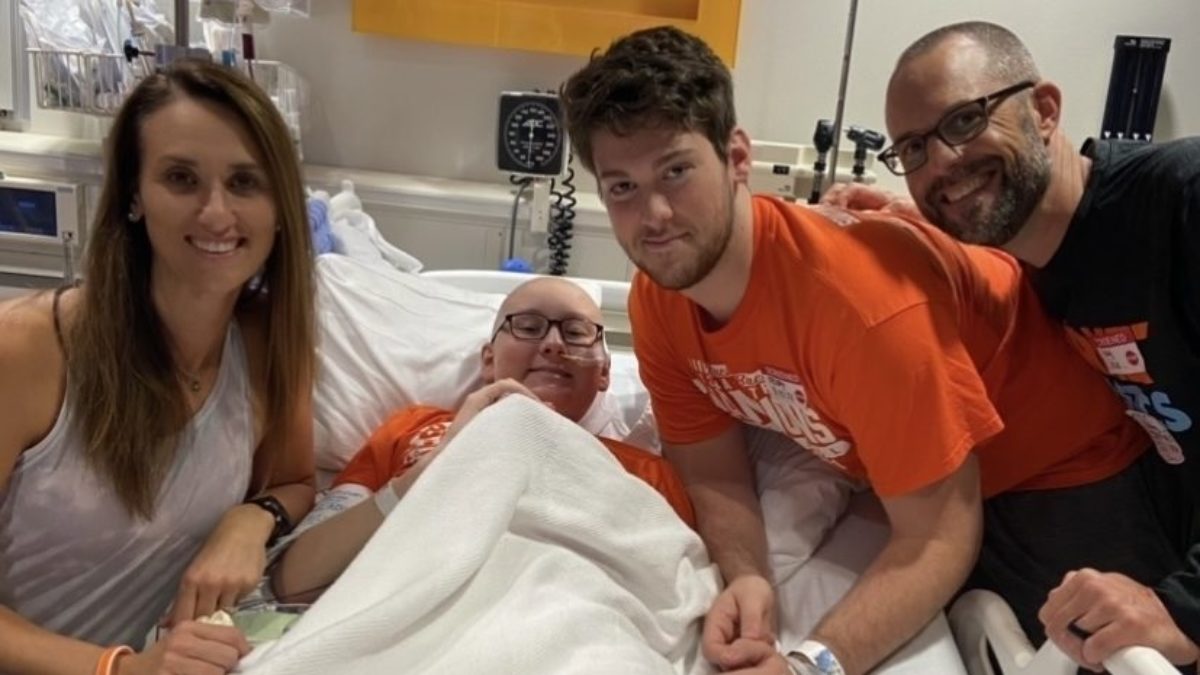 Award to be presented June 29 at the NFHS Summer Meeting

The Wyatt Family, a family of four from Medina, Tennessee, has been selected the 2022 national recipient of the National High School Spirit of Sport Award by the National Federation of State High School Associations (NFHS).

The National High School Spirit of Sport Award was created by the NFHS to recognize those individuals who exemplify the ideals of the spirit of sport that represent the core mission of education-based athletics.

In January 2021, Chris and Carla Wyatt’s 14-year-old son, Brett, was diagnosed with T-cell acute lymphoblastic leukemia after rushing him to the hospital one morning. Doctors told the family that Brett’s leukemia was aggressive and would be particularly hard to treat. After being told that he may not survive, the family began a year-long journey to help Brett attack the disease.

With the prognosis of a lengthy hospital stay for Brett, Carla stepped down from her coaching duties to be by his side. It was one of many sacrifices the family made to help Brett.

While Brett began treatment of chemotherapy and radiation, the community rallied to help the family. The South Gibson High School boys basketball coach Mark Wilkins and other assistant coaches stepped in to help with the girls team in the Wyatts’ absence. Several local schools collected donations and officials returned their game checks to the school to help the family with expenses as they traveled back and forth from the hospital in Memphis. Carla was able to rejoin the team and complete the season but resigned at the conclusion of the year.

As Brett continued to receive treatment throughout the summer, doctors were not optimistic about a recovery. In fact, it was determined that he would need a bone marrow transplant to survive.

Brett’s older brother, Bond, was found to be a perfect match for the bone marrow transplant, a fortunate and unexpected turn of events since siblings usually only have a 25-percent chance of being a match. After finishing his junior year, Bond sacrificed a summer of camps, practices, games and time with friends to save his younger brother’s life.

Brett experienced two setbacks before his bone marrow transplant that pushed the procedure into the start of the school year. Finally, on August 13, the transplant was completed successfully and both brothers began their recoveries.

"I'm glad I could do it. I don't see it as much as being a hero,” Bond told the Jackson Sun. “I just did the bare minimum —probably what anyone would do to help someone in their family. Especially, someone as close as their little brother."

As Bond recovered from the procedure and was able to rejoin his friends and teammates back at South Gibson, Brett continued his recovery in the hospital through the fall. Finally, after 320 days in the hospital, he was able to go home on December 10.

Brett continues to battle the cancer and has regular doctor’s visits to monitor his recovery. But, it’s clear that he and his family will do whatever it takes to make sure he has a full recovery.

The National High School Spirit of Sport Award was started in 2008. Including this year, 15 individuals and three teams have been chosen national award recipients.

The NFHS, based in Indianapolis, Indiana, is the national leadership organization for high school sports and performing arts activities. Since 1920, the NFHS has led the development of education-based interscholastic sports and performing arts activities that help students succeed in their lives. The NFHS sets direction for the future by building awareness and support, improving the participation experience, establishing consistent standards and rules for competition, and helping those who oversee high school sports and activities. The NFHS writes playing rules for 17 sports for boys and girls at the high school level. Through its 50 member state associations and the District of Columbia, the NFHS reaches more than 19,500 high schools and 12 million participants in high school activity programs, including more than 7.9 million in high school sports. As the recognized national authority on interscholastic activity programs, the NFHS conducts national meetings; sanctions interstate events; offers online publications and services for high school coaches and officials; sponsors professional organizations for high school coaches, officials, speech and debate coaches, and music adjudicators; serves as the national source for interscholastic coach training; and serves as a national information resource of interscholastic athletics and activities. For more information, visit the NFHS website at www.nfhs.org.