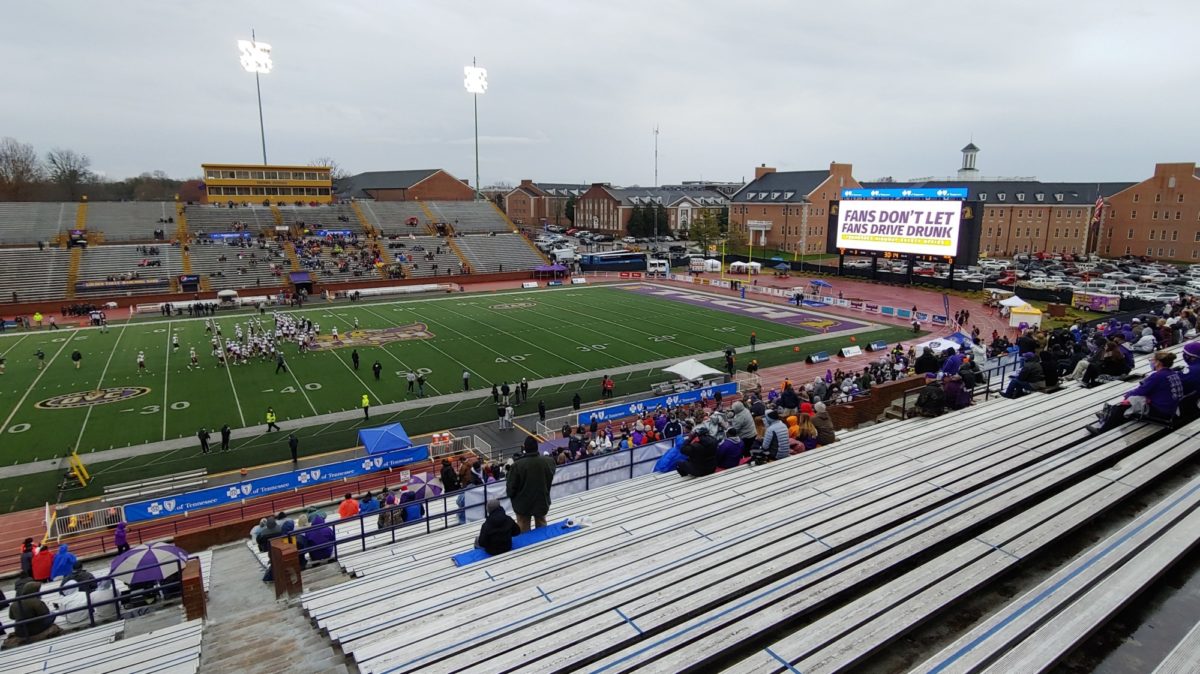 It was considered improbable, if not downright impossible, mere months ago.

High school football, let alone the state championships, seemed equal parts mirage and logistical longshot as the United States, along with the rest of the globe, continued to battle the COVID-19 pandemic.

“If you'd asked me back in the summer,” said Vic Grider, coach at South Pittsburg, one of Tennessee's most enduring powerhouses, “If we would ever get to this point, I would have said no.

“There was so much unknown.”

Then, the Tennessee Secondary School Athletic Association steeled its nerves and went to work developing a set of return-to-play regulations and guidelines with extensive input from the physician members of TSSAA’s own Sports Medicine Advisory Committee along with guidance developed by the NFHS’s advisory committee, one that includes nationally renowned medical doctors and research specialists. Executive Director Bernard Childress also worked closely with Governor Bill Lee’s administration, which had the benefit of expert input from both state and national sources.

A funny thing happened: An unprecedented autumn of high school football, not without hiccups but likewise infused with lifelong-memories, unfolded from Tiptonville to Copper Basin; Mountain City to the Mississippi River; Byrdstown to Loretto.

And outposts in between.

“The way [TSSAA] have fought this thing and tried to let our kids have some kind of reasonable season,” said legendary Alcoa High School coach Gary Rankin, “we really appreciate that at Alcoa High School.”

For many coaches, like Brentwood High’s Ron Crawford, the 2020 season cast a spotlight on a critical theme of educational athletics.

“I think the process has been more joyful for kids. Just getting to play the game has been more magnified as opposed to wins and losses,” said Crawford. “I’ve seen a lot of true joy from kids playing a game, even after Oakland whipped us. I got tons of people saying ‘thanks for getting us a game, thanks for letting us play.’ That’s probably an offset positive of this whole thing.”

The season concluded this past weekend inside Tucker Stadium on the Tennessee Tech University campus in Cookeville. In roughly 60 hours, from Thursday midday through late Saturday night, nine TSSAA State Champions were crowned across Tennessee.

The 18 participating teams combined to score 491 points; the average margin of victory for the nine title winners was 22.6 points per game, though two bouts were decided by a touchdown or less.

Arguably the preeminent game of the championship slate, CPA nabbed its third state title since 2011 under Ingle Martin and denied Lipscomb, steered by former NFL star and Super Bowl-winning quarterback Trent Dilfer, the title. Lipscomb had won the two teams' regular-season matchup, but CPA pounced early to build a 21-7 lead. Lipscomb tied the game at 28 in the fourth but the Lions executed a Cade Law to Cade Reynolds scoring strike for the decisive tally late in the game. Law was named the game's Tennessee Farm Families Most Outstanding Player of the Game after he amassed 204 yards of total offense and a pair of touchdowns in the Division II-AA clash.

Down as much as 21-6 in the first half, Davidson rallied to within 21-19 by the half and used a 34-point second-half explosion to pull away for the crown.

USJ, however, showed remarkable poise. Even after Davidson had staked itself to a 26-21 lead in the third frame, the Bruins got a Tyke Tabor 61-yard touchdown and Steele Haynes' 2-point conversion run for a final lead, 29-26, with just 17 minutes left in the game.

Davidson then reeled off 27 unanswered points to seize command.

Griffin Swinea turned in a performance for the ages when he rushed for 284 yards and four of his team's eight touchdowns as Swinea galloped to Most Outstanding Player honors. Swinea is the son of Davidson Academy's legendary softball coach, Stacy Swinea, a former TSSAA Distinguished Service Award winner.

In what was one of the most suffocating defensive performances in recent TSSAA history, the Blue Tornado yielded just 97 yards' total offense and a mere seven first downs to MUS in the Division II-AAA title game.

McCallie cemented its third all-time crown against the Owls with a dominant first-half performance. McCallie led 21-0 at the intermission and 37-0 through three quarters.

South Pittsburg has been playing for state football championships since the outset of the TSSAA playoffs in 1969.

But this year, Fayetteville found its championship path for the Tigers' first-ever state crown in the Class 1A clash.

With the game knotted at 14-all and barely three minutes left on the clock, Fayetteville (13-2) got a 29-yard scoring run from eventual Most Outstanding Player Kenardo Jackson for the final margin.

On a whopping 30 carries, Jackson finished with 210 yards and two touchdowns.

“It's a miracle to be at this point,” said title-winning coach Kenny Morson. “God's blessed us to get to here. Thank goodness we got to play it all. If you had told me we would get to play (15) games back in the summer, I wouldn't have taken that bet no way.”

The Golden Tide of Peabody are winners of 37 games in a row, three of the state championship kind, after dispatching Meigs County in the Class 2A bout.

Peabody got on track early with three rushing scores from eventual MOP DreQuan Vaughn and took the lead for good less than seven minutes into the game, when Vaughn rushed into the end zone from 11 yards.

The Golden Tide (14-0) capped off their third-straight 2A crown in dominant fashion and, while the school can try to win a fourth-consecutive crown in 2021, it cannot do so in the same division. With new enrollment numbers gathered this fall, Peabody has been reclassified into 1A for the next TSSAA cycle.

The Tornadoes have ascended to levels under head coach Gary Rankin rarely seen in the high school ranks anywhere in the United States. Alcoa was dominant as it captured a sixth-straight Class 3A title in the shutout-win against Milan, which had powered to the title game under first-year coach Carl Diffee.

Ahmauud Sankey established the early tone for Alcoa (14-1) with a pair of first-quarter touchdowns, and quarterback Caden Buckles passed his way to MOP honors with a 19-for-24, 288-yard, two-touchdown performance.

The Tornadoes are 19-time state champions in Tennessee, the gold standard program for gold-ball trophies, and Rankin secured his 16th state crown in the process.

“It's always exciting,” Rankin said of the opportunity to play for another state title. “It's no doubt been probably the toughest season I've been through in a long, long time. With all the unknowns and trying to keep kids healthy, it's been a challenge.”

As is tradition, Alcoa met the challenge head-on and has the championship hardware to show for it.

The Cyclones blew through Haywood en route to a perfect, 15-0 campaign and their second state championship in as many years.

Paced by an explosive opening frame after which it commanded a 21-0 lead, Elizabethton bottled up Haywood's offense and got three scores from game MOP Jake Roberts – including a championship record-setting 82-yard fumble recovery for six in the second-straight championship for current head coach and former Cyclone and Virginia Tech player Shawn Witten.

Roberts also had a 21-yard interception return for a score in addition to his 72-yard scoring reception from quarterback Bryson Rollins.

The Spartans were dominant as they secured the school's first-ever football title and extended the championship drought of Oak Ridge in the 5A bout. Oak Ridge remains one of the state's all-time winningest programs but has been denied a state crown since 1991.

Summit (14-1) blitzed the Wildcats with 14 points in the first seven minutes, 33 seconds and never looked back in cruising to the title.

Game MOP Destin Wade, the Spartans' junior quarterback who holds verbal scholarship offers from a number of major college football programs, ran for two touchdowns and threw for another score in the dominant performance.

The Patriots won their second Class 6A title in three years as they polished off an incredibly dominant 15-0 season under coach Kevin Creasy.

Oakland scored first, taking the lead less than midway through the first quarter and staying atop for the game's final 42 minutes, 42 seconds.

Running back Jordan James galloped to MOP honors with his 226-yard, six-touchdown performance that helped the dynamic tailback race into the TSSAA record books with the second-most touchdowns all-time in a championship game.

Oakland led 42-12 at the half and 56-26 late before Brentwood, which was trying to match the championship feat of its volleyball program just weeks earlier, tacked on the final score. The Bruins closed the year 11-4.

The Patriots have emerged as a dominant force on the 6A level in recent years under Creasy. They've lost just three games since the start of the 2017 campaign, all to Maryville in a rivalry great for high school football in Tennessee, and Oakland has handed the Rebels two of their worst defeats all-time in both of its championship seasons since 2018.