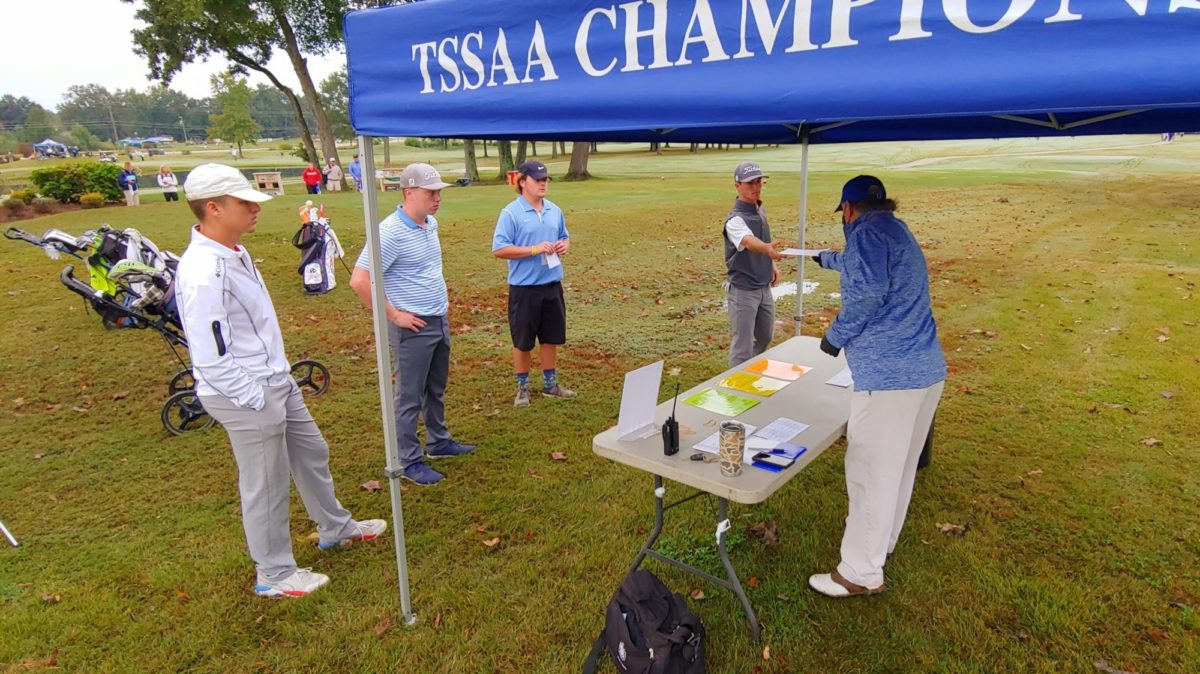 Preparations have been different this year for golf, volleyball, girls' soccer, and football

Not the myriad calls, intraoffice meetings and video conferencing sessions that have gone into the Tennessee Secondary School Athletic Association’s planning phases for its upcoming slate of fall state championships. Rather, Crowell’s taken her work home while working from home, and she cannot recall the number of times her husband has succumbed to a temperature check.

TSSAA’s Director of Championship Events, Crowell, with all hands on deck, is bent on making sure the organization conducts its fall slate of title events --- golf, girls’ soccer, volleyball, cross country and football --- as seamlessly as possible in the COVID-19 era.

“I think we’ve got nine staff – about half of our entire staff – to work the State Golf Tournament and I’ve got five different temperature guns,” Crowell said of the three-week slate of golf championships that open next week. “We have both a coach/participant area for checking their temperatures, and we’ll be checking the temperatures of all the paying spectators in a different area.

“I’ve been testing the temperature guns on my husband. Before he leaves the house, I say, ‘OK, let me see what you got.’”

TSSAA has done its best to foresee the potential hiccups that will inevitably accompany a lengthy stretch of championship events.

“It’s been a trying time, but it’s an opportunity to show off what being a Tennessean is all about,” said Bradley Lambert, TSSAA’s technology director and intricately involved in digital advancements for the championships. “I think that’s making the best of a bad situation, looking for opportunities to contribute and working together to get things done.”

After the sports world writ-large screeched to a halt in mid-March, midway through the Tennessee Girls’ Basketball State Championships, there were countless moments where everyone wondered if high school athletics would happen at any length; title contests seemed as likely as unicorns in a bowling alley.

Now Davis Burris, owner of WillowBrook Golf Club, has readied his Manchester course to host its 11th TSSAA State Golf Tournament but one wholly unlike its predecessors.

Doubt this moment would arrive lingered throughout the summer.

“Oh yeah, I called Matthew (Gillespie) two or three months ago and said, ‘Keep us in the loop,’” said Burris, who noted live scoring for the state tournaments will be every other hole this year. “He said, ‘You’ll be the first call.’ We were uncertain. Hopefully, this second (coronavirus) wave will stay in check.

“We are always excited to let everybody see our course and improvements, but it’s just good to see the kids get to come and participate.”

A greater emphasis on digital ticketing has been a central theme as TSSAA officials have carried out championship plans.

All championship events have been reduced to approximately one-third capacity.

“Year by year, we’ve gone to digital tickets a little bit more,” Crowell said. “This year we think it’s important because there’s limited capacity for our championships. Digital tickets allow us to determine our capacity in advance and only sell that many tickets.

“We’re looking at basically one-third capacity at any venue that has seating; for golf and cross country, we haven’t looked at limiting capacity. Cross country and golf are so spread out, and we changed schedules so that people can leave when their race or round is completed.”

Football capacity at Tennessee Tech’s Tucker Stadium is set at 5,500 fans per game; indoor events, such as the volleyball championships, pose a greater challenge, but plans are in place for limiting attendance at those events as well.

Beyond seating limitations, the biggest change most are likely to see are unpredictable byes in brackets throughout the postseason. While some byes can be anticipated, such as impending first-round byes in the TSSAA State Football Playoffs due to the absence of all Shelby County public schools, many more byes could be seen across all sports when teams aren’t able to play due to COVID-19 situations in their community.

“The postseason will be a more difficult challenge for all schools, compared to how things are handled in the regular season,” explained Matthew Gillespie, TSSAA Assistant Executive Director. “Unlike the regular season, we don’t have the flexibility to delay, reschedule or swap out opponents. If a game cannot be played, we just have to move forward with the bracket.”

The best method for athletes, coaches, parents and schools to keep up with the changes to the postseason and for the latest information will be the TSSAAsports.com website.

“TSSAAsports.com is going to be our hub for the postseason,” said Lambert, who noted the organization has already encountered more than 400 schedule changes this football season due to COVID-19. “Of course people are already used to going there for the football standings and to see brackets. TSSAAsports.com is a jumping-off point for all of our championships and fans will be able to find all of the information that would normally appear in game programs there, including links to purchase tickets, live scoreboards, live stats, live video and more.

“Then, after the game you can spend another few hours looking at all the historical information that’s on there for your school and the teams in your area.”