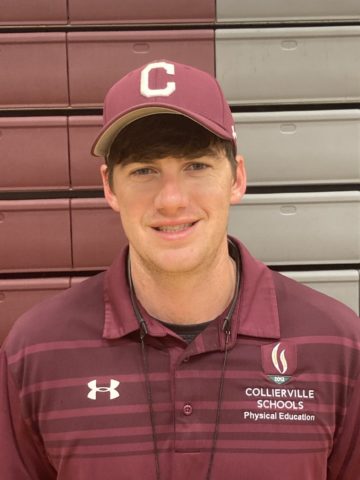 Growing up in Athens, Alabama, and attending a 2A high school, Bachelor played baseball, basketball and football.

“My P.E. teacher and coach, Brian Gafford, really helped me along the way,” Bachelor said. “He kind of helped me get the passion or the fire to want to go into coaching and coach different sports.

“He kind of kept me in line and stayed on top of me to make sure I was taking care of business in the classroom, behavior-wise, and pushing me to do better. And that’s kind of what I needed at the time.”

Oh, and Bachelor instructs myriad activities and sports each day as a physical education teacher at Collierville Middle School. His work there, and in the greater Memphis area since landing in Tennessee a few years ago, has helped result in Bachelor being named a Tennessee Secondary School Athletic Association Distinguished Service Award winner for the 2021-22 academic year.

“Since I was playing sports, all I’ve ever wanted to do is coach,” Bachelor said. “I had a passion for it, to want to help people. And especially when I got over to Raleigh-Egypt High School, the best part there was to impact the students and see their lives positively affected. That’s all I was going for.”

Bachelor owns some four years’ experience coaching baseball, in addition to his work at Raleigh-Egypt and a stint atop Collierville’s freshman football program. Collierville’s 2021 baseball title march concluded with dominant, 11-3 and 5-1 wins against Greenbrier Middle and Stewarts Creek Middle, respectively, to punctuate the title run.

As monumental a feat as that was for the program, and for Bachelor, he points instead to the resources inherent in the program and the team’s home park as signals of the tight-knit community’s buy-in.

“We have, as far as middle schools, probably the best middle school facility in the state,” Bachelor said. “We took over the old Collierville High School baseball field, and it’s a huge plus for us to get to practice on that and play on that. It’s a legit high school facility, and all the boys have lockers, batting cages for work. We have good resources at Collierville.”

And Bachelor, who with wife Brittany welcomed their first child, son Beckett, eight months ago, likewise has a good approach to coaching – on the field and in the classroom. Err, gymnasium.

“I like coaching and teaching, and when you’re doing P.E., you’re kind of always coaching,” said Bachelor, a University of North Alabama graduate. “Whether you’re teaching a new sport or activity, you’re coaching them to help them be successful. And I like to tell everybody, I can find one thing that everybody will like doing. You get to see everybody, get to know everybody. Build those relationships.

“Like I said, I’ve got a passion for coaching and getting to teach those kids. And even in baseball, it’s not always about the sport. It’s so much easier to get fired up and involved with these kids when they’re buying into everything you say and you’re just trying to help instill principles in them to be taking care of grades, being respectful, controlling behavior. These kids are willing to go to work, they’re coachable, and it makes you want to come in and go to work.”