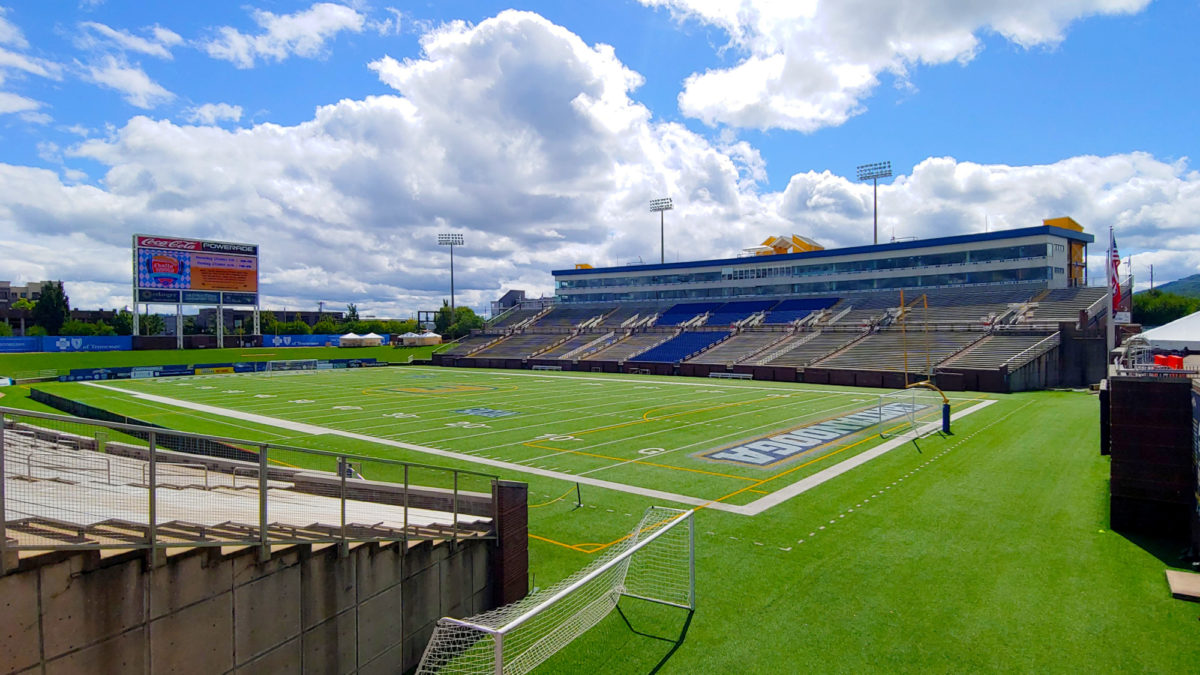 It's bigger than Arnold Schwarzanegger in “Terminator” and more raucous than AC/DC bellowing “Back In Black.”

A year after COVID-19 impacted almost every single week of the 2020 high school football season and also brought about protocols for the event's final year in Cookeville, TSSAA welcomes back its fall centerpiece into picturesque Finley Stadium.

“We’ve been playing football for 100 years in Tullahoma,” said veteran Wildcats coach John Olive. “This is the first time for us, in the sport of football, to make it to a state championship game.

“I cannot say enough good things about our football team and the things they have accomplished this year. Every week we have different people step up and make plays.”

Added Oakland coach Kevin Creasy, whose Patriots outlasted Maryville last week in the Class 6A semifinals to secure a return trip to the championship, “It’s a real privilege to be back in the BlueCross Bowl. We’re really glad Chattanooga is making things so easy and they’re obviously excited about hosting. We’re excited about going to another college stadium. I think it’s pretty neat for our guys to play last year at Tennessee Tech and then this year playing at Finley Stadium. It’s pretty awesome.”

Thursday's action features all three Division II title bouts; CPA vs. Lipscomb Academy open things in the 11 a.m. tilt for the II-AA crown, followed at 3 by the DCA-Nashville Christian battle for the II-A title. The trio of opening-day championship contests concludes with the McCallie-MBA grudge match for the II-AAA title.

“We have been in the semifinals for each of the last four years and weren’t able to win and get to the state championship game,” noted Nashville Christian head coach, Jeff Brothers. “For us, the excitement is that breakthrough moment where we’ve climbed to the next rung on the ladder and given ourselves to play for a championship.”

Ralph Potter, a coaching veteran of 28 years, recognizes the return to normalcy as one of the high points of his McCallie team’s 2021 campaign. Meetings and dinners with the entire team have brought his players back together for their run at three-straight championships.

“The thing that’s different is that we appreciate it more now, at least I do. Because when you didn’t have [team gatherings] during that entire year, I think it was pretty tough on everybody. We’re not meant to live that way. So, I think it’s been a really fun year in terms of getting back to normal and having normal events.”

Friday's trio of games pits Alcoa against East Nashville in the 3A bout at 11; South Pittsburg vs. McKenzie at 3 for the 1A title; Powell vs. Page in the 5A battle.

In a weekend that serves as a showcase of Tennessee's greatest and grittiest teams, it is a showcase setting for numerous top-tier collegiate prospects. The Powell contest is one that includes the Panthers' Walter Nolen, a defensive lineman who recently committed to attending Texas A&M next season.

“My daddy played here, I played here,” said Powell coach Matt Lowe. “I’ve always called the Powell community home. If there’s one school that I’d ever imagine winning a championship at, it’s this one. There’s nothing better than having that community support. For a kid that grew up in this community, maybe this is one of those small details where you’re actually able to give back to this community and give them something to be proud of.”

As Westview plays Saturday, Ty Simpson's father, Jason, and his UT-Martin team will be competing that day in the FCS Playoffs against Montana State while his future team, the Crimson Tide, face Georgia for the SEC title.

Saturday's other games feature Elizabethton vs. Tullahoma in the day's opener for the 4A title (11 a.m.) and concludes that evening with Oakland vs. Summit – a game featuring multiple collegiate commitments include pledges to the University of Georgia as well as the University of Kentucky.

What is a virtually brand-new experience for some programs, such as Tullahoma as well as East Nashville, is simply expected for others – as in the case of gold-ball standard-bearer Alcoa.

Led by TSSAA Hall of Fame head coach Gary Rankin, Alcoa is seeking a seventh consecutive state crown and what would be the program's 20th all-time gold ball.

“We were in a comfort zone in Tennessee Tech, we’ve been there quite a few times. I’m looking forward to playing at UTC, I know they’ll do a great job putting on the game. I don’t think it really matters where the game is being played, but it’s a different scenario. I’ll be excited to be playing in a different city.”

The Tornadoes' opponent, East Nashville, finds excitement in opportunity and overall program growth – as well as the tight-knit community's investment into the program.

“It’s a blessing to be at this point for East Nashville,” said Eagles coach Jamaal Stewart. “The kids are excited, and you can tell the change in the school as well. It’s just an honor and a blessing to have one more week with our players and be sharing this memory.

“It’s a positive feeling, the community is involved. We had a rough schedule [with six games on the road] and for us to band together during playoff times and get to this point, it’s big. We’re happy to represent Metro Nashville Public Schools, and East Nashville in general, and we’re just happy for the opportunity.”

Elizabethton's Shawn Witten offered perspective on every team's journey to Chattanooga – and the magical experience at hand.

“We’ve traveled a lot, it seems like we were on the road the entire season,” Witten said. “It’s put into perspective how hard it is to get here.

“We know we’re playing a very tough team with a lot of tradition, so it doesn’t get any easier making it to the state championship and playing the best of the best.”

A full of schedule of the games can be found below as well as information on how to purchase tickets.

Finley Stadium has a clear bag policy for spectators. Only one clear plastic bag no larger than 12 inches by 6 inches by 12 inches or a one-gallon, clear, resealable plastic storage bag per person will be permitted. Fans will also be allowed a small clutch purse not to exceed 4.5 inches by 6.5 inches. No other bags will be allowed inside Finley Stadium. All items, including clear bags and clutch purses, are subject to search at the gates.

Smoking and vaping is prohibited at the stadium.

Advance tickets through GoFan (gofan.co) are $12 each and good for all three games in a day. Tickets at the gate are $15 each. All spectators school-age and older must have a ticket. Gates will open one hour prior to the first game.