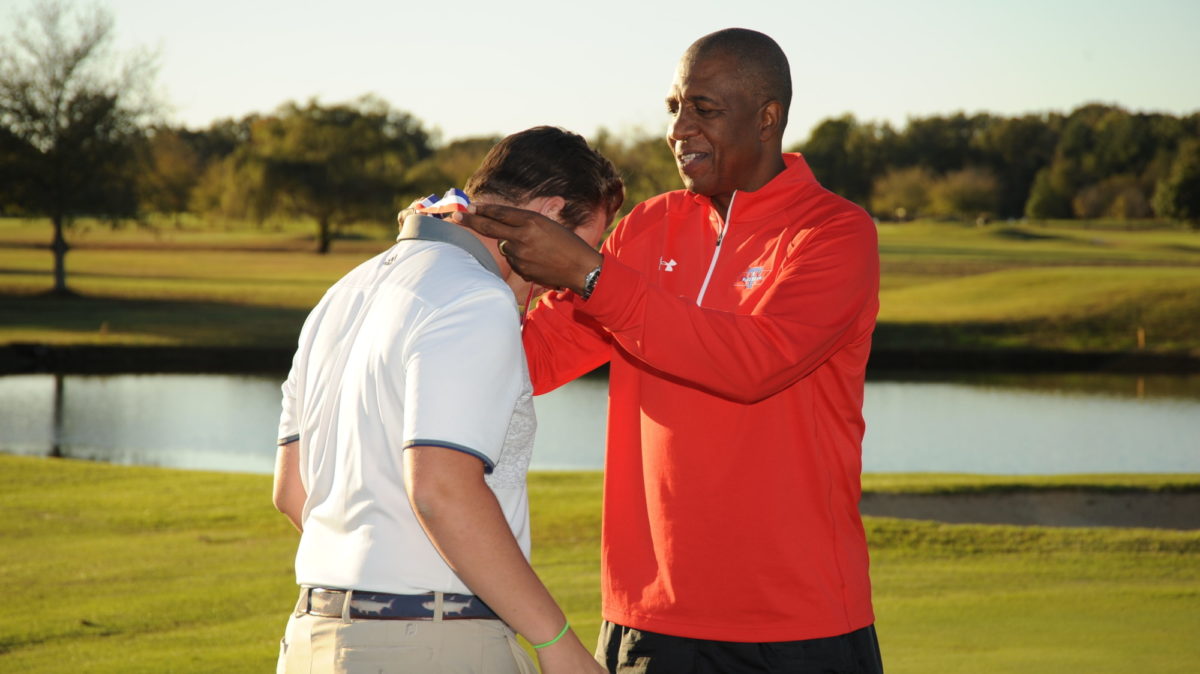 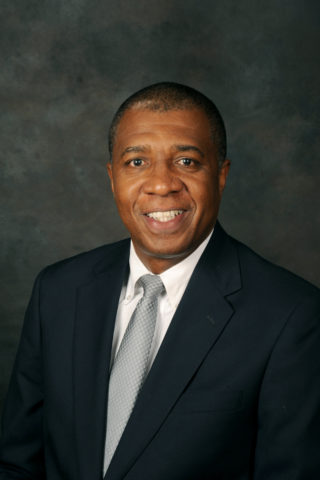 Bernard Childress, Executive Director of the Tennessee Secondary School Athletic Association (TSSAA), has announced his retirement, effective June 30, 2022, after 13 years as the executive officer of the organization. Childress notified the Board of Control of his intent to retire in a special-called meeting held virtually on April 6, 2022. Childress became the fourth Executive Director in the association’s history in 2009 and was preceded by Ronnie Carter (1986-2009), Gill Gideon (1972-86) and the association’s first director, Mr. A.F. Bridges (1946-72).

Mr. Childress was hired as an Assistant Executive Director of TSSAA in the summer of 1995. He was the first African American individual to serve the association in an executive capacity and was promoted to the position of Executive Director in 2009 after 14 years with the organization.

During his tenure as Executive Director, Mr. Childress was not only a part of, but instrumental in numerous milestones that have shaped the association. Perhaps his most widely-recognized contribution will be for his work to meet the significant challenges faced by the association and its member schools through the COVID-19 pandemic. Mr. Childress and his staff tirelessly worked with health professionals and the Governor’s office to develop safety protocols for student-athletes and fans, which ultimately led to the resumption of athletic participation among TSSAA member schools in the fall of 2020. 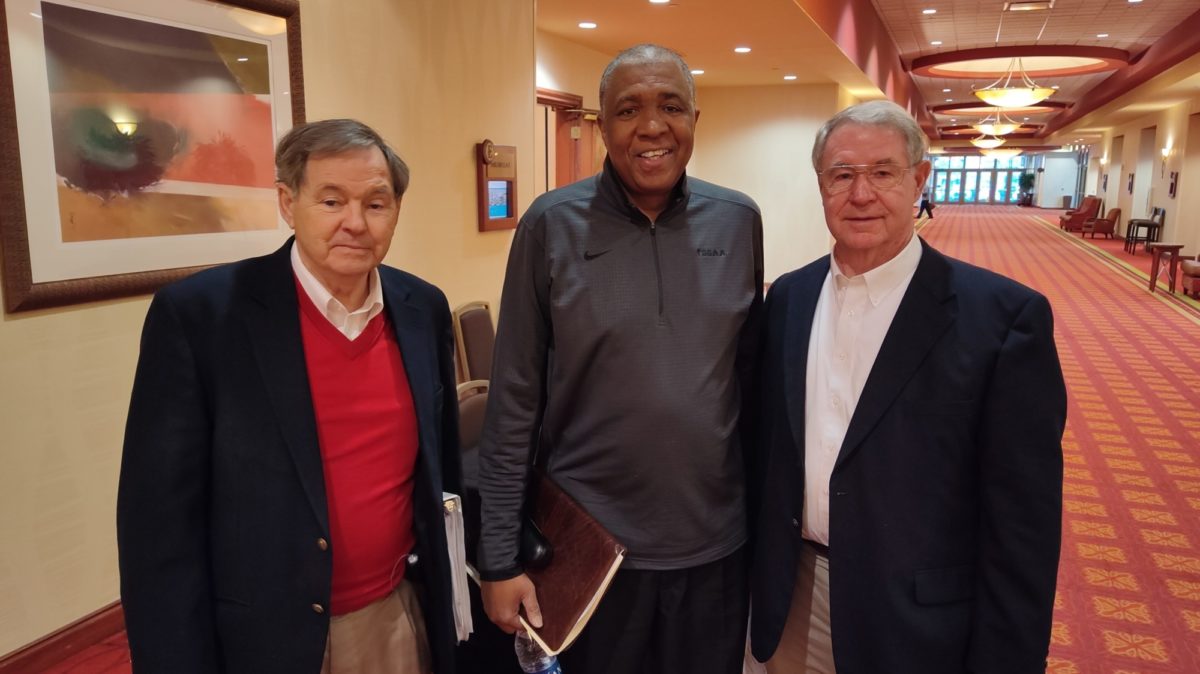 One of Mr. Childress’ early challenges as Executive Director was to return the association to sound financial footing after a decade of exhaustive litigation. Five years into Mr. Childress' tenure, the TSSAA began distributing shares of football and basketball championship revenue to the participating schools, a sign of the improved financial stability of the organization.

Under Mr. Childress’ leadership, the association became an early participant in the InSideOut Initiative, a partnership between TSSAA, the Tennessee Titans and the NFL Foundation. The program continues to help schools build a culture of positive sportsmanship and shift from a “win-at-all-cost” mentality to one where athletics solidifies its role in the character development of athletes.

Mr. Childress has overseen the development of significant technology projects affecting the association. Launched in 2017, TSSAAsports.com has become the public face of TSSAA championships and home to an overwhelming amount of historical information on the schools and athletes that have participated in TSSAA events. Two major refurbishments to the association’s main website, TSSAA.org, have taken place under Childress. The most recent updates in 2019 saw the addition of specially-tailored landing pages for individual interest groups and the publishing of in-depth news articles and feature stories about the people and schools of TSSAA. 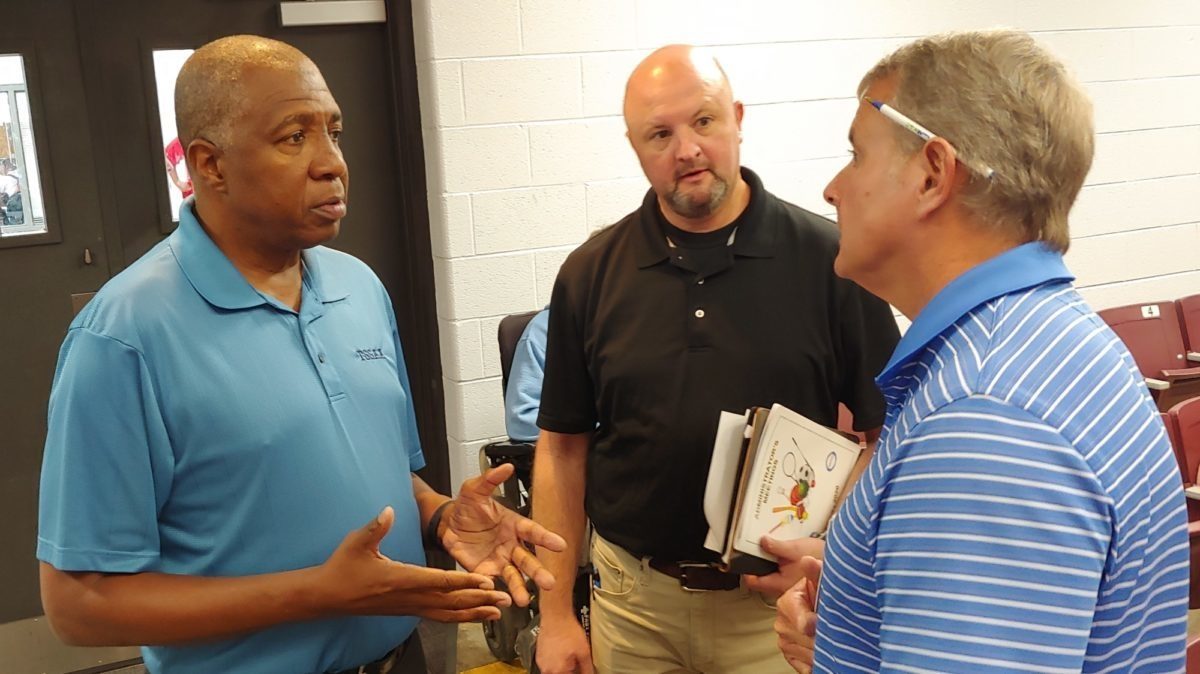 Mr. Childress was honored for his contributions to high school athletics as a recipient of the prestigious NFHS Citation Award in 2005. The NFHS Citation is one of the most highly regarded achievements in high school activities. He was inducted into the Belmont University Athletic Hall of Fame in 1992.

The Tennessee Middle School Athletic Association (TMSAA) was an early focus of Mr. Childress when he was first appointed to the position of Assistant Executive Director of TSSAA in the mid-1990s. The organization, operated under the umbrella of TSSAA for the benefit of middle schools in the state, now consists of more than 400 member schools and has added state championship series in 10 sports since Mr. Childress became Executive Director in 2009.

Attention to the health and well-being of student-athletes became a greater focus during Mr. Childress’ time as director, resulting in the formation of the Sports Medicine Advisory Committee along with the development of concussion protocols and changes to football practice regulations regarding heat acclimatization.

With his promotion to the position of Executive Director in 2009, Mr. Childress became the third African-American in the nation to be named the executive director of a high school athletic association, following Louis Stout of the Kentucky High School Athletic Association and Jerome Singleton of the South Carolina High School League.

TSSAA experienced many milestones while under the directorship of Childress:

Mr. Childress, a native of Columbia, TN, graduated from Columbia Central High School in 1973 where he participated in basketball. He was selected for the all-state basketball team his junior and senior years. He received his Bachelor of Science degree from Belmont University in 1978, where he was a member of the basketball team for four years. He was selected to the all-conference team his sophomore, junior, and senior years and led the team in scoring his junior and senior years. Childress was voted captain of the team his senior year. He continued his education at Trevecca Nazarene University where he received his Master’s Degree in Administration and Supervision in 1985. He began his career in education as a teacher and coach at his alma mater, Columbia Central High School. He left the school after six years and took the position of assistant men’s basketball coach at Middle Tennessee State University in 1985 where he remained for one year. Childress returned to Columbia Central in 1986 where he held the position of Assistant Principal for four years before being named principal at Whitthorne Middle School where he would remain until he joined the TSSAA in 1995.

Mr. Childress, 66, has been married to the former Pinkie Joyce for the past 43 years. They have two daughters, Nicole Hambrick (Mario) and Tiffany Emebunor (Kennedy), and two grandchildren, Nicholas Bernard (4) and Olivia Hermene Hambrick (3 months).

January 8, 2009 - Board of Control promotes Bernard Childress to the post of Executive Director, effective July 1, 2009 following the retirement of Ronnie Carter.

March 2009 - Mr. Childress leads the committee to review bids for football and Spring Fling state championships. For the first time, TSSAA invited municipalities interested in hosting championships to submit proposals and assemble financial packages that would assure the association received a consistent level of revenue from year to year.

August 2009 - TSSAA, with the aid of Baptist Sports Medicine and the Tennessee Athletic Trainers Society, forms the Sports Medicine Advisory Committee which will consist of medical professionals from across the state and provide guidance to the association on matters pertaining the health and safety of student-athletes.

August 2009 - Addition of third class in the sport of girls’ volleyball.

August 2010 - TSSAA forms an agreement with Licensing Resource Group (LRG) that provides a pathway for schools to receive royalties for merchandise sold by manufacturers that display the school’s mascot or logos.

December 2010 - Legislative Council adopts the “Home School Rule” which provides a framework for the participation of homeschooled students on TSSAA-member school teams.

August 2013 - TSSAA becomes one of 28 founding state associations of the NFHS Network. The network is a joint venture between PlayON! Sports, the NFHS and many of its participating member state associations. In 2014, the network recognized Cleveland High School as one of the top content-producing schools in the nation as the school used the NFHS Network platform in its broadcasting classes under the district’s Career and Technical Education Department.

March 2014 - Girls’ Wrestling becomes a sanctioned sport for the 2014-15 school year. Tennessee would later become the first state in the country to have a Girls’ Dual Wrestling State Championship.

September 2015 - Legislative Council adopts the “Coaching Link Rule” which states that a student with an athletic record that transfers to a new school where an “athletic coaching link” existed in the past 12 months will be ineligible for 12 months at all levels in the specific sports where a link was present.

March 2016 - Legislative Council adopts a proposal by Hillwood High School to restrict the application on the Transfer Rule to only the sports in which a student has an established athletic record from the previous school.

July 2016 - Board of Control modifies soccer and girls’ soccer classification to add a third class beginning with the 2017-18 school year.

September 2017 - The “TSSAA News,” which the association began publishing seasonally in 1932, becomes a fully digital newsletter delivered monthly to administrators and coaches via email.

December 2017 - Legislative Council approved changes to the Amateur and Award Rules that removed restrictions that were previously in place that prohibited student-athletes from receiving certain awards or gifts.

August 2018 - State office introduces a new website, TSSAAsports.com. The website focuses on providing information for current state championship events, as well as all historical information the association has collected dating back to the 1920s.

May 2018 - TSSAA partners with Special Olympics of Tennessee to host its first Unified Sports event in conjunction with 2018 Spring Fling state track and field championships. The association would go on to add Unified Track as a sanctioned sport and host state-wide invitational events for Unified Bowling.

July 2019 - The new TSSAA.org website is unveiled, featuring a series of landing pages custom-tailored for the various types of frequent visitors and feature articles from professional sportswriters.

April 15, 2020 - Tennessee Governor Bill Lee announces that schools will close for the remainder of the school year. Subsequently, TSSAA cancels all remaining TSSAA events for 2019-20, including all spring sports and the postponed basketball championships.

July 22, 2020 - First in-person meeting since COVID-19 shutdown. Distancing and masks required, Siegel High School lecture hall. Because of the Governor’s no-contact orders, the Board of Control adopted a football contingency plan assembled by the state office which allowed for a start date as early as Aug. 21 or as late as Sept. 18. The plan advanced by Childress protected schools’ existing football schedules to the greatest extent possible and provided for a flexible pathway between a full 10-game regular season with traditional playoff format and a shortened eight-game season with a reduced playoff field for Division I.

August 17, 2020 - Board votes to structure Division I basketball, baseball and softball into four classes instead of three. This was the first change to basketball classifications since 1975. Due to the impact of COVID-19 on school enrollments, the Board adopted a two-year classification cycle.

November 2020 - Due to the COVID-19 pandemic, the state cross country meets were not held on the Steeplechase Course at Percy Warner Park in Nashville for the first time since 1971. The event was moved to Sanders Ferry Park in Hendersonville.

June 2021 - Board of Control expands options for virtual schools seeking membership in the association. The Legislative Council would later incorporate the changes into the Constitution and Bylaws to permit students in attendance of virtual schools to participate in athletics at the public school they would be zoned for.

June 2021 - Emily Crowell is promoted to the position of Assistant Executive Director. Crowell becomes the first female to serve the association in an executive capacity. 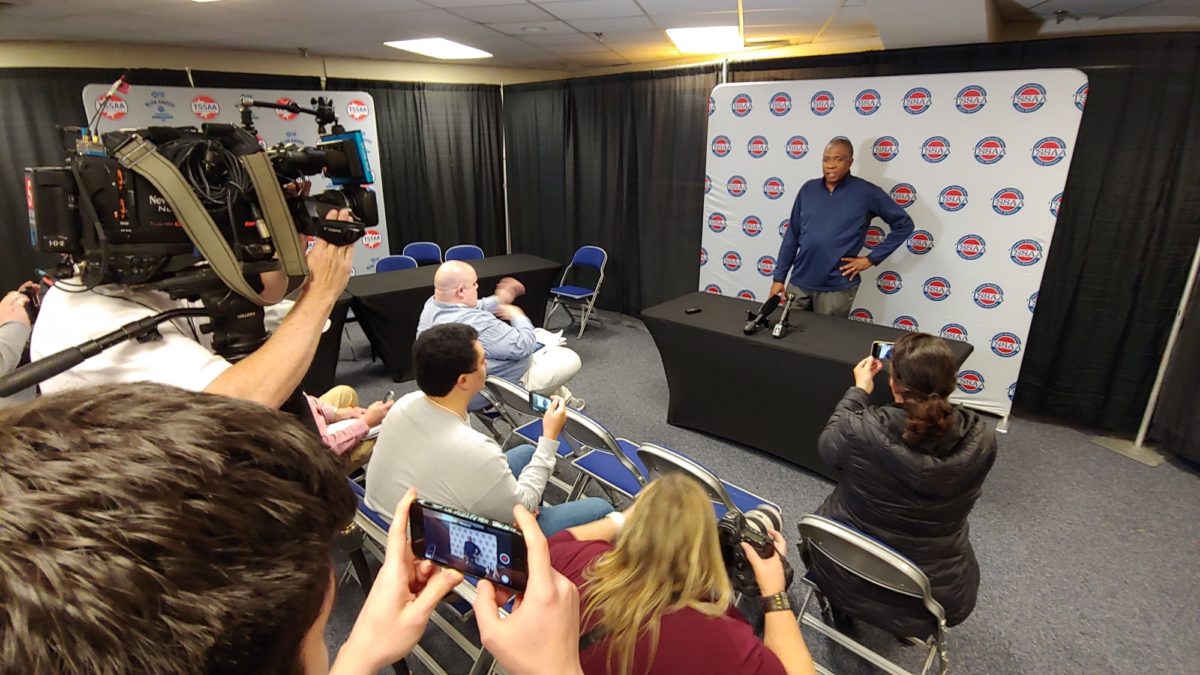 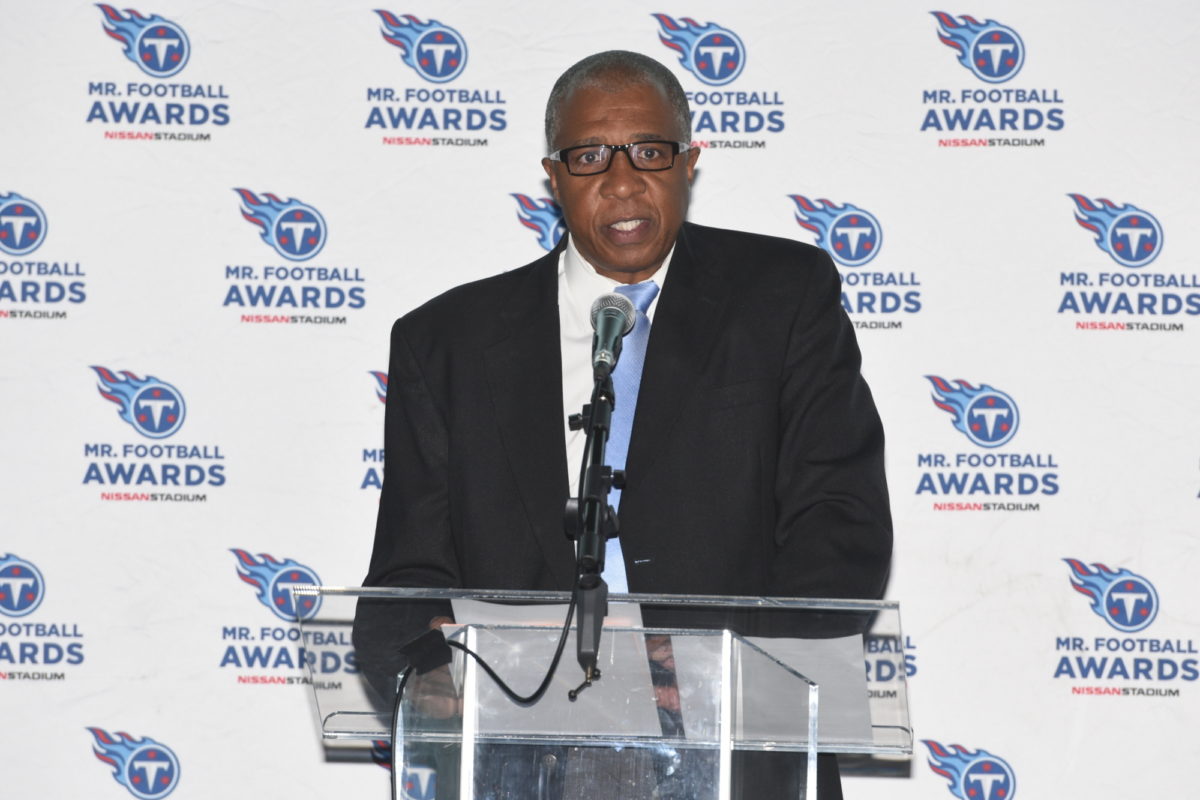 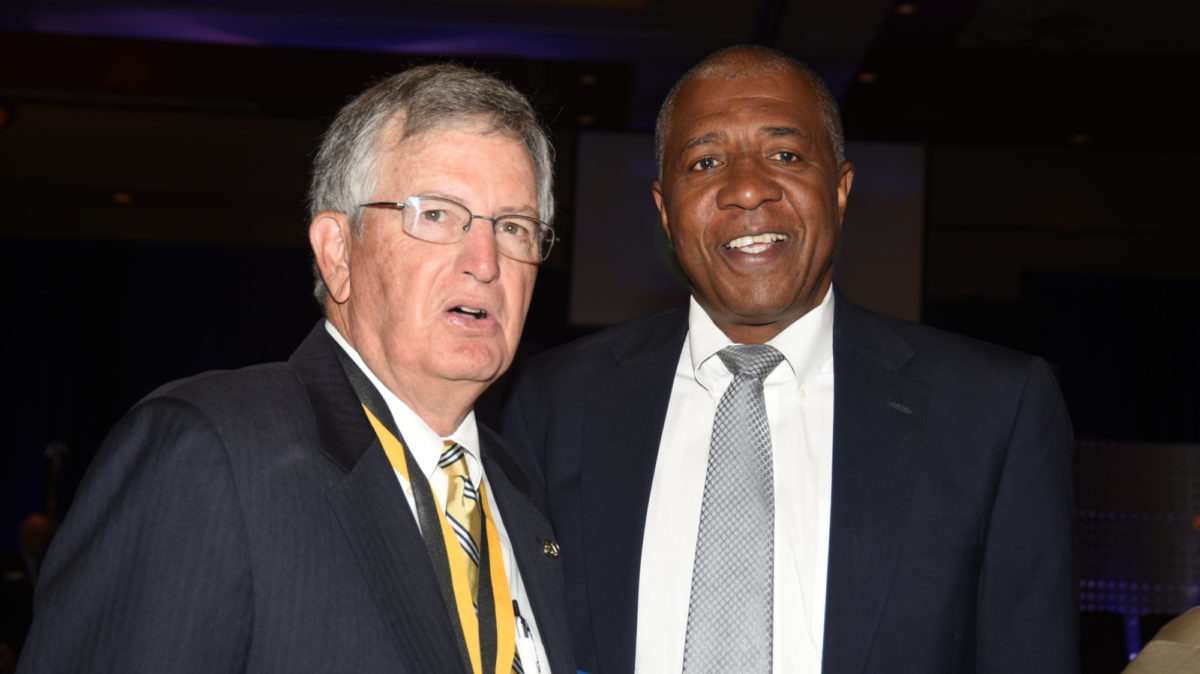