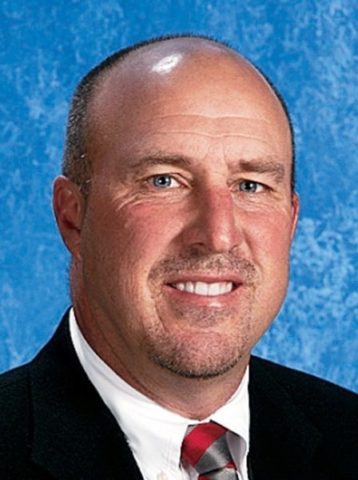 Championships on football fields, golf courses and virtually every playing surface imaginable have dotted the career of Gary Partrick. But the Baylor School head boys' and girls' golf coach, who also has produced a lengthy career as an athletics administrator, cannot name all the championships nor is he inclined to do so.

Those aren't what have kept Partrick intertwined with young people, and specifically their athletic endeavors, since the early 1980s. It boils down to a single component for Partrick, the first Tennessee Secondary School Athletic Association Distinguished Service Award recipient of the 2021-21 school year.

“Relationships,” Partrick said. “There is nothing any greater than the relationships with kids that develop, whether that's going to their wedding or they when they have kids or when you get those random texts at 10 in the morning that just say, 'Hey, Coach, thinking about you.'

“I can't tell you how great it is, all the different schools I've gotten to be a part of, how many kids I get to stay in touch with. I'm not big on social media, not a big fan, but am as a reader because it lets me help stay in touch with former players and students.”

A former football player and coach at Austin Peay State University, Partrick transitioned into what would become a lifelong secondary educational career while on a recruiting trip at East Ridge High School on behalf of the Governors.

“I grew up at Red Bank, and when I recruited at Austin Peay, they gave me Chattanooga because I knew so many people in the area,” Partrick said. “I was recruiting there and they had a teaching slot and it paid a little better than Austin Peay's low man on the totem pole back then.”

Partrick taught wellness, physical education, driver's education and even some general science at East Ridge for a decade before becoming an assistant football coach and head boys' baseball coach at Soddy-Daisy. That was followed by a run at Cleveland High School, where the Blue Raiders football program was a state and regionally known powerhouse; Partrick also helped launch the softball program.

Then, an old friend and coaching colleague, David Bibee – who coached with Partrick at Austin Peay – convinced Partrick to join him at Chattanooga’s Baylor School.

He's never left, and, after helping with the offseason program for boys' and girls' golf from 2006-08, Partrick assumed the head coach's mantle. Baylor has amassed a bevy of individual and team titles since that time.

“It was interesting to become a part of this program,” Partrick said. “I had handled winter and spring golf roles after football for a couple years. I got to be around it, got to see the part that wasn't glamorous and saw the work our kids put in. Watching how they prepare every day, it was a little different than how I grew up playing golf recreationally. It's really been an education to come from football and baseball backgrounds and being exposed to a whole other type of competition and learn there is a team element in high school golf. The unselfishness of shots they decide to hit, because they know they've got four teammates counting on them. It's neat to try to build the team aspect of high school golf to make it a little more family-oriented than individual.”

The commitment from the school, as well as the dedication of his players and the relationships formed organically within those roles, give Partrick his outlook.

“We have been around some really, really good players at a place where golf matters,” he said. “Golf is important here, and you can't say that at a lot of places. Our administration and school has made golf a priority for a long time and I'm lucky enough to be the steward of that right now.

“It gives perspective; I'm always trying to move kids along and help develop them in whatever time I'm fortunate to be allotted with them. I'm a lot better granddad than I was a dad. I coached everybody else's kids and kind of missed mine growing up. But the scope of my job seemed to increase the older I got, and it became a little bit bigger than just winning and losing and included trying to develop other areas as well. Football, and the sacrifice and team and blood, sweat and tears that go into counting on the guy next to you, teaches a lot of life lessons. Golf and etiquette and honor and being on your own, I don't know if there are two better sports to be around to teach everything. They're totally different in a lot of areas but their outcomes helps kids be better people.”

TSSAA proudly recognizes Coach Gary Partick for his many years of dedication to Tennessee’s student-athletes.