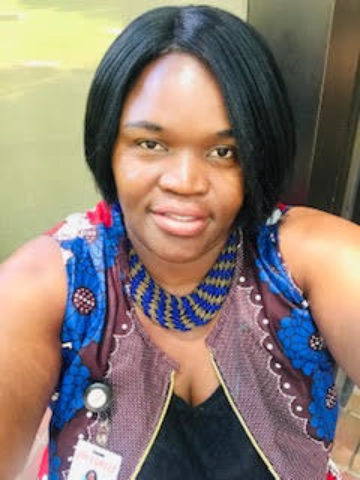 To say that volleyball is part of her identity doesn’t even remotely portray the sport’s importance to Phyllis Anyango.

Rather, the native of Kenya is now an esteemed high school and collegiate official here in the United States, and a 2019-20 TSSAA Distinguished Service Award honoree, because the sport she once pursued, basketball, required too much running.

“I could write a whole book; I do have a lot to give back in volleyball, because that’s what made me come to the U.S., gave me the opportunity to come here,” said Anyango, who lives in the Jackson area and officiates prep games in the Mid-South Association. “I get a chance to work with people in volleyball club and also be there to officiate them, and it’s just a pleasure to watch them grow and get the opportunity to train the other officials and get them on board.

“I also officiate college, Division I, NAIA, all over. My days are filled with the game.”

While volleyball now consumes much of Anyango’s time, the former Union University standout who majored in computer science and math remembers her first introductions to sports.

“It’s a funny story, because I did not play volleyball at all in high school until I graduated,” Anyango explained. “Back home we do have clubs, companies do have clubs and they do recruit kids to play for clubs, train for basketball, and I changed my mind and switched to volleyball because I didn’t like to run. So I was about 19 or 20 when I first put my hands on a volleyball.

“Two years after that, I got a call for my Kenyan National Team. I played for the national team and I was on the Olympics team in Sydney at the 2000 Olympics and I did that for over 10 years before I came to the U.S.”

It was Anyango’s global exposure that got her noticed by American coaches.

“I came to the U.S. in 2001 on a volleyball scholarship. In one of our international matches, we had been to play the USA Team and a coach from Texas contacted me and my other two friends in Kenya and asked if we would like to come to school and get free education and play volleyball. Funny enough, I was a freshman at 29. I couldn’t play Division I but I played junior college and NAIA (at Union). I stayed here after I got my job. So my life is 8-5 work, then after 5 go to the volleyball court to train or call volleyball.”

Anyango’s warm memories as a player now have company from her work with the TSSAA.

“I got to officiate at the TSSAA State High School Tournament, twice, and that was a favorite moment,” she said. “I have a lot of favorite moments, especially being with other officials.

“Everyday I learn something new from not just other officials but also the players. Just to see some of the plays and be able to work with other great officials, it’s really an eye-opener.”

TSSAA is proud to recognize Phyllis Anyango for her commitment and outstanding service as an official of high school athletics in Tennessee.