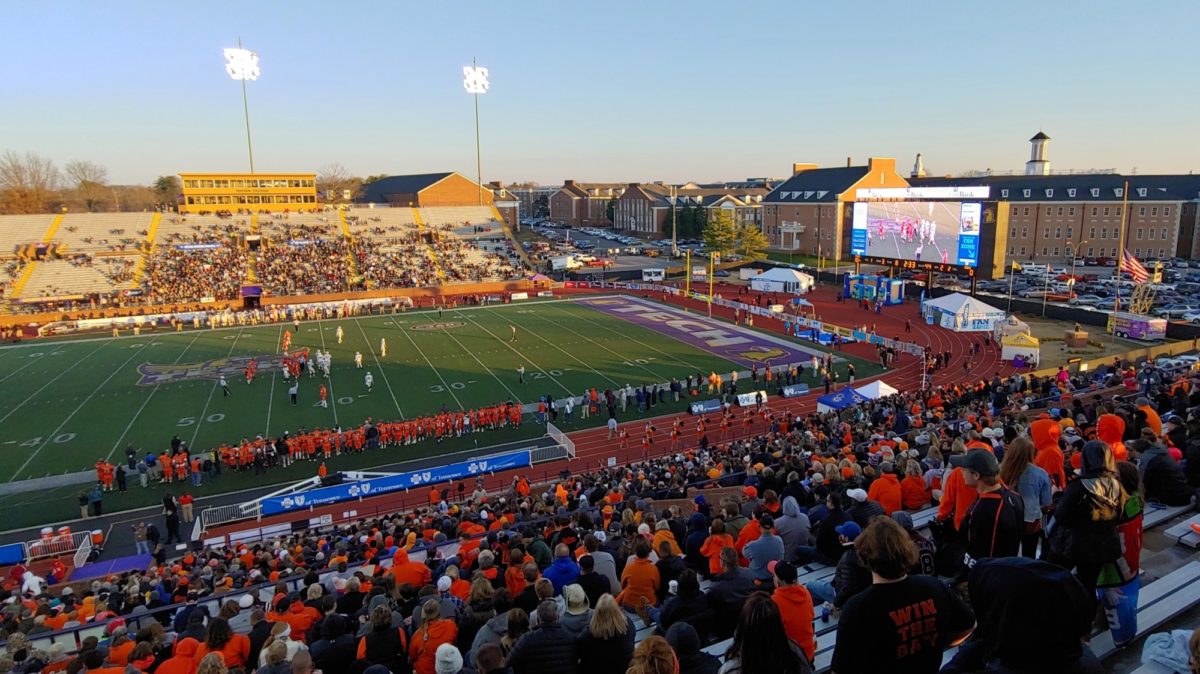 Highlights from the nine-game gridiron spectacle in Cookeville

The Tennessee Secondary School Athletic Association wrapped its 10th year of BlueCross Bowl state football championships in Cookeville over the weekend, with some of the state’s most storied programs adding to their heritage and student-athletes from all parts of the state leaving their marks on history.

In all, nine 2019 state champions were crowned from Thursday through Saturday night. When the pads finished popping and whistles were just echoes, 385 collective points were scored in the title games, three teams rallied from halftime deficits to become state champions and yet another utilized a fourth-quarter offensive outburst to claim its first championship in 34 years.

Here's a final look back at a BlueCross Bowl championship weekend inside Tennessee Tech’s Tucker Stadium that featured a little bit of everything.

In all, the nine title victors combined to score 270 points --- an even average of 30 points per game.

Despite an invitational football playoff championship in 1938, the Cyclones had yet to claim a state title in the 51 years since the modern playoff format was established in 1969. After 29 playoff appearances over 50 years, a program that Shawn Witten first rebuilt, and has since maintained at an elite level, finally broke through in a major way.

Elizabethton polished off a 15-0 ledger with a dominant win against Springfield Saturday afternoon. The Cyclones outscored their playoff opposition by a whopping 135 points, 181-46. Bryson Rollins was the game’s MVP with 241 yards of total offense and two touchdowns. He also set a new championship game record by completing 11 of 12 pass attempts for a 91.7% pass completion percentage.

Witten, and his brother, Dallas Cowboys and NFL Walter Payton Man of the Year winner Jason, were standouts on Elizabethton playoff teams in the late 1990s.

Lake County, which this past May competed for a state baseball championship at Spring Fling, broke through on the gridiron for the first time in the lifetimes of its players.

But this Lake County squad was undeterred. Facing a Greenback squad trying to repeat in 1A, the Falcons overcame a 23-22 deficit at the onset of the fourth quarter to win by two touchdowns, 38-23.

Tanner Snyder, with scoring bursts of 4 and 33 yards in the decisive final frame, was the game MVP.

The MVP award in this contest went to quarterback DeAngelo Hardy, part of the dominant Blue Tornado effort in the 28-7 triumph in the Division II-AAA championship. Maybe that’s because it would have been unfeasible to name the entire McCallie defense as MVP after the unit helped establish a new BlueCross Bowl record with a whopping nine quarterback sacks for the Blue Tornado’s first title since 2001.

Hardy had more than 100 yards rushing and two touchdowns as part of a McCallie attack that gashed MBA for some 273 yards on the ground.

Meanwhile, that staunch McCallie defense limited MBA to a scant 42 rushing yards and just less than 200 through the air. They also set a new championship game record by recording nine QB sacks. The previous record was set by MBA in 1999.

It trailed from the five-minute mark of the second quarter until the opening play of the fourth quarter.

Still, Davidson Academy found a way. And in the process, it won its fifth state championship since 2005, taking home the Division II-A Gold Ball and repeating for the second time. Davidson has still never lost in a state championship appearance, winning back-to-back in 2005-06, adding a third crown in 2008 and securing back-to-back triumphs again with this comeback-win.

The mighty Alcoa Tornadoes, with legendary head coach Gary Rankin and wunderkind defensive coordinator Brian Nix, uncorked another dominant, suffocating performance as it shut out Pearl-Cohn 27-0, in the Class 3A Championship.

Alcoa’s fifth-straight state crown and seventh of the decade, it might have had its all-time best defense in 2019. The Tornadoes shut out eight of their final 11 opponents, finished with 10 total shutouts and, showcasing their fearlessness for playing all comers, beat a pair of 6A playoff teams in Blackman and Dobyns-Bennett.

Camden Burden was BlueCross Bowl MVP in the 3A game for his defensive heroics; he notched eight tackles, three of them for loss, including two sacks, and he also had two quarterback hurries.

Humbled with its worst loss in 60 years as it was eliminated by Oakland last year in the Class 6A semifinals, Maryville embarked on something of a ‘Revenge Tour’ in 2019.

It started early in the season, continued in that same semifinals round with a romp of the Patriots and concluded with an absolute evisceration of Ravenwood Saturday night in the finale to the weekend of championships.

The Rebels built a commanding lead early and cruised behind MVP quarterback Cade Chambers, who had two touchdowns apiece rushing and passing.

Maryville led 14-0 and once it reclaimed a two-touchdown lead at 21-7, it led by double-digits for the game’s final 31 minutes.

The Rebels won for the second time in three years under coach Derek Hunt and stayed one back of rival Alcoa for most state championships all-time.

It took a brilliant second-half rally, but Peabody overcame a nine-point halftime deficit to repeat as Class 2A champions and post back-to-back state championships with a 28-16, come-from-behind win against a Meigs County team in the state finals for the first time in 25 years.

Down 16-7 at the half, Peabody got 155 rushing yards from Walter Dickson as well as Dickson posting 5.5 tackles on the defensive side of the ball for the captivating comeback.

ECS BACK ON TOP

Evangelical Christian School faced a 14-10 deficit and had trailed much of its game against Christ Presbyterian Academy in the Division II-AA Championship.

Then Jacob Hatcher provided the winning score and Andrew Agapos nailed down MVP honors. Agapos had 9.5 tackles and forced one of the five fumbles that the ECS defense pried loose in the battle, three of which were recovered by the defense.

ECS has five titles in their nine championship game appearances --- but this was their first since 2005.

After Central finished runner-up in its first two state championship game appearances, in 1999 and 2016, Rosser has now guided the Class 5A Bobcats to back-to-back titles.

The Alcoa-Central-Maryville trio of schools all claimed state championships and are separated by just 30 miles.

The Bobcats got a sparkling MVP-performance from quarterback Dakota Fawver, who completed 16 of 21 passes for 216 yards and two touchdowns.

The Bobcats had a two-game hiccup in the final two weeks of the regular season and then mauled through the playoffs with an average winning margin of 18-plus points per game. They allowed just one touchdown across their final eight quarters of the season.